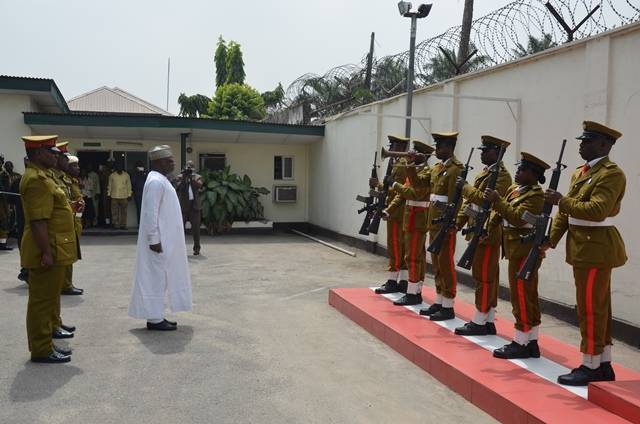 The Chairman/Chief Executive of the National Drug Law Enforcement Agency (NDLEA) Col. Mohammad Mustapha Abdallah (rtd.), has promised to intensify the war against drug barons in the country.

Abdallah , who had been busy with budget defence for the Agency in Abuja, has reported at the national headquarters of the NDLEA in Lagos with the inspection of infrastructures to determine areas of critical attention.

According to Abdallah, “drug barons must be immobilized. Drug trafficking is a serious transnational organized crime capable of undermining national security and development. The Agency shall adopt new strategies in preventing illicit drug production, trafficking and abuse. The image of our country must be protected from the inimical activities of drug cartels. Staff welfare shall be improved and adequate logistic support provided for drug control operations. While acts of compromise shall not be condoned, measures will also be put in place to make corruption unattractive”.

The NDLEA Chairman who was accompanied by the Director General, Mrs. Roli Bode-George, Directors and principal officers at the headquarters, did not mince words on his determination to rejuvenate the Agency for optimum performance.

“I have taken time to study about the Agency and I appreciate the challenges of inadequate funding. Drug control is one of the priority concerns of Mr. President and I hope to leverage on this robust political will in dismantling drug trafficking organizations. The Agency will maximize the benefits of intelligence-led policing in prosecuting the drug war”.

While assuring officers of better days ahead, the NDLEA boss however charged officers to be dedicated to their duty. “I want you to expect better days ahead in terms of improved working conditions. However, you must remain dedicated to duty. Your loyalty and commitment must first be to our country. Understand that your assignment is important to the peace, safety and development of our country. Any act of indiscipline shall be treated in accordance with the rules of engagement” he stated.