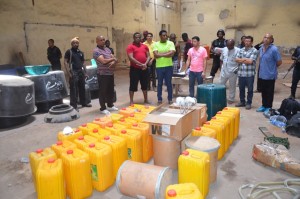 Officials of the Special Enforcement Team (SET) of the National Drug Law Enforcement Agency (NDLEA), have made a significant breakthrough with the discovery of a super laboratory for the illicit production of methamphetamine located at Asaba, Delta State.

This super methamphetamine laboratory similar to the ones found in Mexico, is the first to be discovered in the country.

NDLEA Chairman/Chief Executive, Col. Muhammad Mustapha Abdallah, said that the laboratory has a capacity of producing between 3,000kg to 4,000kg of methamphetamine per production cycle.

Those arrested include four Nigerians believed to be joint owners of the laboratory and four Mexicans who are methamphetamine production experts hired as technical partners into the country.

“A significant feature of this laboratory is that the production process is more technical and sophisticated because it uses the synthesis method of methamphetamine production. All the principal actors linked to this illicit act were apprehended in a simultaneous raid on members of the drug syndicate in Lagos, Obosi in Anambra state and at the laboratory in Asaba, Delta state”,  Abdallah said.

According to Mitchell Ofofoyeju, the cartel first brought two Mexican methamphetamine experts, Cervantos Madrid Jose Bruno and Rivas Ruiz Pastiano to Nigeria but because of the size of the laboratory coupled with the volume of work, two additional Mexicans, Castillo Barraza Cristobal and Partida Gonzalez Pedro were added.

Our investigation revealed that a successful test production was done at the laboratory in February 2016”.

The Agency warned that unless drastic measures are taken against this trend; the rise of super laboratories will put Nigeria on the global spotlight in methamphetamine production.

“This is because the laboratory operates at an industrial scale with a high yield of 3,000kg to 4,000kgs of methamphetamine per production cycle. Nigeria methamphetamine is now competing with others in Asia and South Africa markets. The super laboratory does not need ephedrine because it uses the synthesis method. Drug cartels are now shifting from simple method of methamphetamine production to a more complex process. The discovery calls for celebration because the operation demonstrates the capacity and preparedness of the agency to track down drug cartels irrespective of their covert mode of operation” he stated.

The threat posed by this laboratory is disturbing because mass production will make the drug easily available thereby increasing the rate of abuse. More citizens will equally be targeted by drug cartels that are searching for drug mules to smuggle drugs outside the country. This has the tendency to increase the number of Nigerians in foreign prisons thereby affecting the image of our country.

Methamphetamine laboratories pose a serious threat to humanity because of the toxic nature of chemicals used. Methamphetamine dump pollutes the environment. This is because for every one pound of methamphetamine produced, about three to six pounds of toxic waste is created. This can contaminate the water table within 500 meters radius from the laboratory. Even plants close to the dump were found to be dead. The laboratory contains highly poisonous solvents and gases. Some are pyrophoric in nature capable of explosion; other chemicals are carcinogenic, capable of causing cancer while some are highly combustible and corrosive.

The NDLEA noted that adequate funds are required to detect laboratories, provide protective kits and also to decontaminate the production site. Major body organs can be damaged through exposure to poisonous gases and chemicals.

The estimated cost of cleaning this laboratory is about thirty-five million (N35,000,000) naira. Money is also needed to carry out public enlightenment. This will create awareness and provide information to help people make informed decisions. Protective measures must be taken to safeguard the lives of officers and that of innocent Nigerians.

The Agency advised members of the public to be vigilant and report suspicious factories to it.

A methamphetamine laboratory can be identified by their secret operations. It can be detected by irritation caused by chemicals, smell of chemicals and coloured water on sewage.

The Agency cautioned that houses used for methamphetamine production should be avoided while chemical containers must not be used for domestic purposes.

The NDLEA reiterated its commitment to work with the relevant Agencies like the ministry of health and environmental protection in enhancing public health and safety.