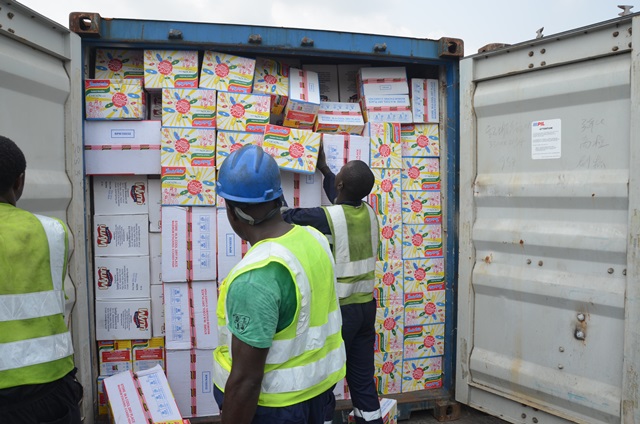 The Special Enforcement Team (SET) of the National Drug Law Enforcement Agency (NDLEA) has arrested a suspected drug baron, Tochukwu Harris Ubah, who is believed to be coordinating a large volume of methamphetamine and ephedrine distribution in the country.

He was apprehended after intense undercover operations in connection with illegal exportation of 576kgs of narcotics to Durban, South Africa through Apapa Port.

The drug made up of 266kg of methamphetamine and 310kgs of ephedrine valued at 4.6 billion naira were hidden inside noodles, cereals and palm oil.

Preliminary investigations by the NDLEA revealed that the suspect, Tochukwu Harris Ubah is also known as Etochukwu Alaek Weubah and Eto Ubah.

It was gathered that the 42-year-old has a company, Visoch Resources Limited which he uses as a cover for his clandestine drug business.

Although surveillance report indicates that he is major player in drug smuggling, Tochukwu hides under the cover of floor tile business.

Apart from the seized drugs, other items in the consignment include maize, vegetables, palm oil, malt drinks, seasoning, noodles and cereals.

According to SET commander, Sunday Zirangey, the suspected drug kingpin, Tochukwu was arrested at the old local section of the Murtala Muhammed Airport upon arrival from Enugu.

“His arrest took place simultaneously with the interception of the consignment of drugs to South Africa. He was immediately taken to the Port to witness the search operations.

“The methamphetamine was hidden inside packs of Golden More Cereals and Indomie Noodles while the ephedrine was concealed among gallons of palm oil”, Zirangey stated.

Chairman/Chief Executive of the Agency, Ahmadu Giade described the arrest as another milestone achievement in Nigeria’s fight against narcotics. He also attributed the success of the operation to diligent undercover operations.

“This operation has again validated the importance of intelligence gathering and management in drug control. The arrest of Tochukwu is a product of painstaking surveillance and another milestone success in the fight against drugs. This seizure is a confirmation that criminal investments will always go down the drain,” Giade assured.