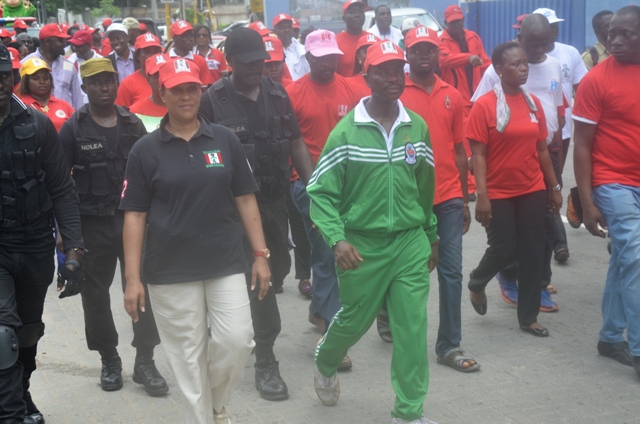 The National Drug Law Enforcement Agency (NDLEA) has led other stakeholders in a sensitisation road walk against drug abuse and trafficking.

The walk is part of activities marking the International Day Against Drug Abuse and Illicit Trafficking which holds on June 26. The Director General of the NDLEA, Mrs Roli Bode-George who led other stakeholders during the walk in Lagos said that it was aimed at creating awareness on the dangers of substance abuse.

“The Agency seeks to increase the level of awareness concerning drug abuse and illicit trafficking. There are people who have drug abuse challenges but do not know how to get solutions. Many are dying daily while others are confined to psychiatric hospitals. The NDLEA want to assist members of the public to live a healthy drug-free lifestyle through public enlightenment” she stated.

The theme for the commemoration of the World Drug Day is Listen First. Hand bills with different messages such as Harken to The Cry of Your Child, Listen First Nigeria, Your Child Must Not Be The Next, among others were distributed to members of the public during the walk.

The Director General added that parents can help save a life from illicit drug use today if only they can listen more and seek help for children before and when they get hooked on illicit drugs.

Representative of NAFDAC, Mrs. Samo Stella who is the deputy director drug demand reduction, Deputy Route Commander of FRSC, Mr. O.T Ayoola and Comrade Ifenuga Babatunde, president Youth of All Nations, a Non Governmental Organization against drug abuse said that they glad to participate in the walk.