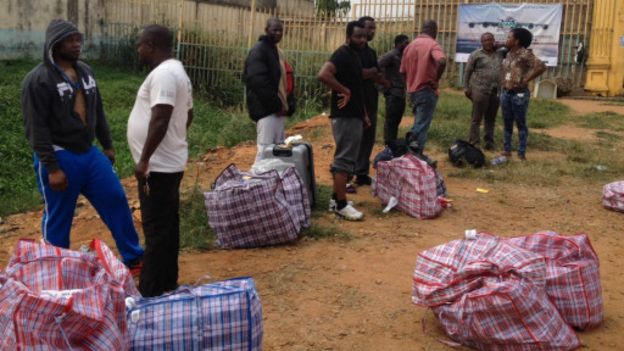 The National Emergency Management Agency (NEMA), said it has received another batch of 149 stranded Nigerians from Libya brought by IOM.

The Returnees, NEMA said,  arrived Nigeria via Buraq Airlines Boeing 737-8000 with registration number 5A-DMG at about 1:20 a. m on Friday at the Cargo Wing of the MMIA, Ikeja

The profile of the Returnees showed that adult females are 56, one female child and 2 female infants while adult men are 81, with 2 male children and 8 male infants.

Though, all the Returnees were those living in Tripoli, the Country Capital City, many of them confessed that they didn’t suffer the ordeals of the those who stayed outside the capital city but regretted venturing into such unreasonable and destructive journey.

Aminat Sunday, 29 from Ifo Local Government of Ogun State, expressed her regret , saying that if she had known she would not have travelled but for  the burdens of siblings, her children and persuasion by her trafficker.

She said didn’t pay her trafficker before leaving but paid her with a year’s salary.

“I got a fair job of housemaid but the work made me to come home because it is very stressful, tiring and have serious health problems on my body”, she said.

Aminat went further to say that “In Libya, their house have large compounds and all of it have tiles, as maid after cleaning the main house, I have to scrub the whole tiles floors and fence every day with a salary of an average of N50,000 amount.

‘I could not achieve the initial of raising for the upkeep of my family.There is no banking system over there and there is no way money could be remitted back to Nigeria except through Nigerians who have banks in Nigeria.

“You pay them 5,000 dollars only 2,500 dollars will be given to the dependants. I actually regretted embarking on the journey but thanks to Almighty God and IOM for bringing me safely”, she added.

When asked about her advise to those who are still thinking of taking irregular journey like they took, she said: I will never encourage anyone to embark on such irregular journey To be sincere, Nigeria is far more better than Libya, I have learned my lessons in wrong ways but thank God I am still alive”.