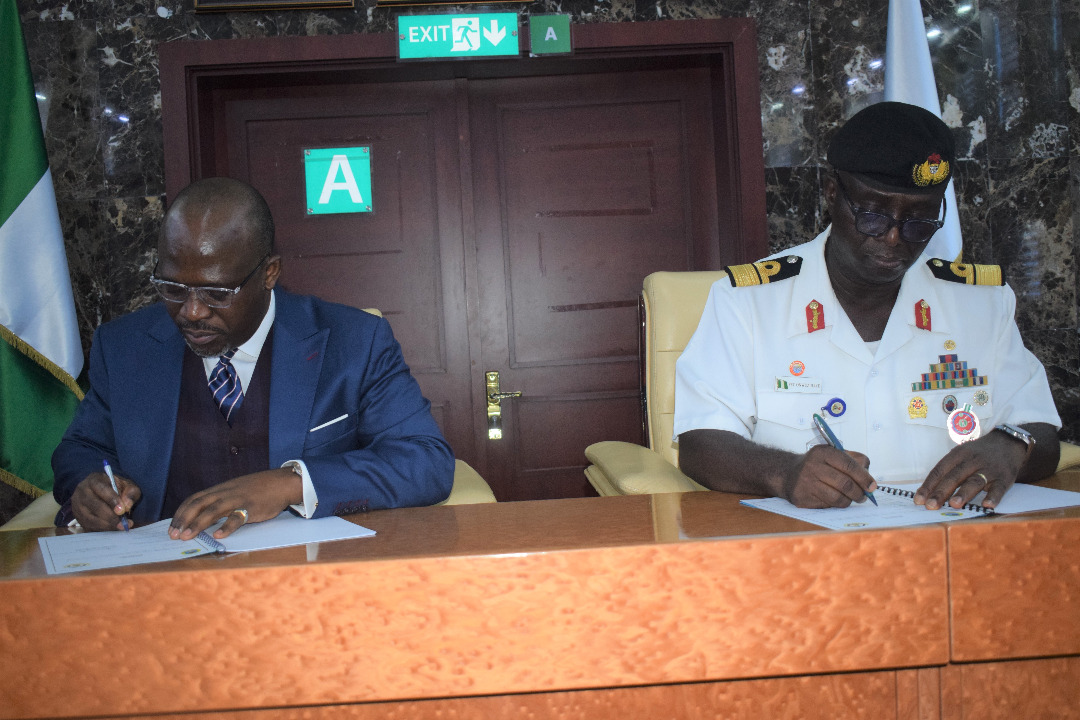 Less than two weeks after it sealed a pact with its Saudi Arabian counterpart, the Nigerian Safety Investigation Bureau (NSIB) has signed a Memorandum of Understanding with the Nigerian Navy to enhance mutual efforts in the prevention and mitigation of accidents and serious incidents in the country’s transportation sector.

According to the Director-General of the NSIB, formerly known as Accident Investigation Bureau (AIB), Engr. Akin Olateru, the MoU, which was signed on Tuesday by both parties at the Nigerian Navy Headquarters, Abuja, would enhance efforts towards the initiation and implementation of effective plans at the vicinity of accidents and serious incidents.

In a statement signed by Tunji Oketunbi, General Manager, Public Affairs of NSIB, Olateru was quoted as saying that the MoU would benefit the Bureau in the area of safety, research, capacity building, diving, search and rescue, retrieval of Flight Data Recorders (FDR) in maritime environment, data analysis and for assistance in the conduct of investigations on Naval platforms.

The Director General of the Bureau further stated that: “This MoU is coming at the right time we need the Navy most. We would need to come up with a Standard Operating Procedure (SOP) on how we can strengthen this relationship. It is not about signing the document, there is a lot of work to be done.”

While appreciating the Nigerian Navy for making the agreement happen, the Director General disclosed that the mandate of the NSIB is to investigate accidents and serious incidents that occur in all modes of transportation.

He said the signing of the agreement between NSIB and Nigerian Navy is in line with the global practice of inter-agency partnership between the civil air accident investigation agencies and the military to promote air safety, adding that it is also a response by the Bureau to the Federal Government’s call for synergies among agencies of government for good service delivery.

“All over the world the military partners with the civil to achieve a set objective, as this is not peculiar to Nigeria. The benefits of any strategic collaboration of government institutions is for the common good of the country’, Olateru said.

Speaking, the Chief of the Naval Staff, Vice Admiral Auwal Zubairu Gambo said that the MoU gives credence to the directives of President Muhammadu Buhari on inter-agency collaboration aimed at enhancing National Security, adding that “The Nigerian Navy, by this MoU, will benefit from the resources provided by the NSIB while the NSIB in a like manner will benefit from utilizing resources provided by the Nigerian Navy”.

Vice Admiral Gambo who was represented by Rear Admiral Suleiman Seidu, the Chief of Policy and Plans reiterated that the MoU, which seeks to support the parties in safety, research, training, capacity building and deployment of other incidental services beneficial to the discharge of its mandate, will also avail the Nigerian Navy with requisite skills and expertise and use of the NSIB’s laboratory for accident investigation, among others.

The MoU was signed by Engr. Olateru for NSIB and Rear Admiral Perry Uwazulike, the Chief of Naval Standards and Safety for the Nigerian Navy.

Olateru used the occasion to disclose that AIB as the Nigeria’s accident investigating body is currently transiting to the Nigerian Safety Investigation Bureau(NSIB) following the repeal of the Civil Aviation Act 2006 and has been replaced by NSIB (Establishment) Act 2022 by the Federal Government, which empowers the Bureau to investigate, not only air accidents but civil, maritime, rail and other modes of transportation networks for improved safety in accordance with the global practice.

“ The accident Investigators are separated from Regulators. This is the practice today all over the world,” said the NSIB boss.

The agency, then as Accident Investigation Bureau, had also assisted the Navy in 2012 in the investigation of the crash of the Nigerian Navy Augusta Helicopter that occurred in Bayelsa State killing the former Kaduna State Governor, Patrick Yakowa and the former National Security Adviser, General Andrew Owoye Azazi (Rtd).