NTSB to train 22 Nigeria’s accident investigators in US 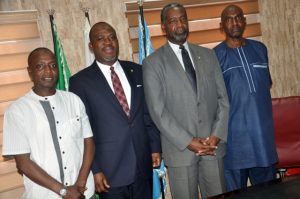 22 staff of the Accident Investigation Bureau (AIB) would be travelling to the United States to receive On the Job Training (OJT) at the National Transport and Safety Board (NTSB) on air crash investigation.

Engr. Akin Olateru, Managing Director of AIB, made this known while briefing aviation correspondents on the workshop organised by the International Civil Aviation Organisation in conjunction with  the NTSB, for the agency’s staff at AIB headquarters at the Murtala Muhammed Airport (MMA), Lagos, which would round up today.

Olateru, who recalled that when he took over as AIB Commissioner, ‘staff of the agency had not been trained for a long time because of paucity of funds’, added that he immediately swung into action by initiation a meeting with the NTSB and other international organisations to develop human capacity in the Bureau.

“This is the fall out of the meeting I had with the NTSB in the United States of America, his counterparts from ICAO and others. Right now in this workshop, we had been trained on strategy and others”, he said.

He said the essence of the workshop, which is also targeted at the Banjul Accord  and the West Africa sub-region personnel,  was not only for training but also to provide opportunity to discuss with the staff and share ideas.

Olateru also said that the meeting had assisted the bureau in clarifying so many issues as they concern accident investigation.

He said the essence of his visit was to train AIB staff, adding that he had also met with the staff, discussed and shared ideas.

He revealed that the NTSB in its existence for over 50 years, had carried out 145,000 accident investigations, adding that he has spent many years around Africa, organizing workshops.

Olateru disclosed that Jones, who has over 40 years of experience in accident investigation, has investigated over 1, 000 accidents, adding that ‘this is why he brings his wealth of experience to us to exchange ideas in Nigeria.

‘His experience has helped us in clarifying grey areas in investigation”, he added.