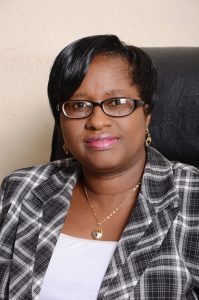 Acting Managing Director of the Nigerian Aviation Handling Company plc (nahco aviance), Mrs. Folashade Ode, has tasked the staff of the company on vigilance and dedication to duty.

Ode, who spoke while on a visit to some units within the company, told members of staff that it is important for them to be very vigilant.

She said the Company appreciates the efforts they put into their work and that they should not rest on their oars.

Ode, who was named MD/CEO in an acting capacity in a notice received at the Nigerian Stock Exchange (NSE) on August 7, 2017, told staff at the Export Warehouse of the Company that they should at all times, adhere strictly to the guidelines governing the exportation of cargoes through the warehouse.

She reminded staff that they should always educate and update themselves on prohibited items on the export list so as to guide against taking them from shippers.

These items, as published on the website of NCS include, maize, timber (rough or sawn), raw hides and skin (including Wet Blue and all unfinished leather) H.S. Codes 4101.2000.00 – 4108.9200.00, scrap metals and unprocessed rubber latex and rubber lumps.

Others are artifacts and antiquities and wildlife animals classified as endangered species and their products e.g. crocodile; elephant, lizard, eagle, monkey, zebra, lion etc. and all goods imported.

She emphasised to the staff on the need to watch out especially for donkey skin which is prominent on the list of prohibited items and which had been the source of concerns between shippers and Customs.

“NAHCO has never and will never accept to export any item on the list of prohibited items including donkey skin. You should always be on your guard”, she said.

Ode also stated that the excellent state of the NAHCO warehouse was what made it the first port of air cargo export in Nigeria and advised staff to make good use of the facility.

In another development, Ode told staff that in line with the duties and responsibilities of the Board of Directors of NAHCO Plc, the Board has decided to reconfigure and re-align the top management as part of the reorganization process to re-position NAHCO for better performance and growth, which will take place in phases.

She also said that “the re-organization is part of the Board’s response to the ever-changing market conditions, the overall NAHCO growth strategy and to demonstrate the Board’s resolve to improve performance and pursue the business sustainability and growth agenda going forward”.