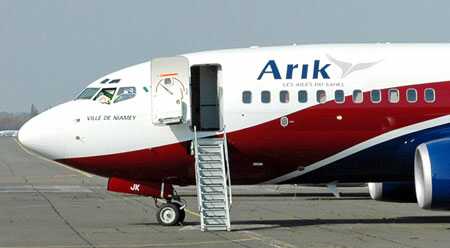 The management of Arik Air said it has resolved the impasse with labour unions led by the Lagos State branch of National Union of Air Transport Employees (NUATE), Air Transport Services Senior Staff Association of Nigeria (ATSSSAN) and  National Association of Aircraft Pilot and Engineers (NAAPE) at a meeting mediated by the Nigerian Civil Aviation Authority (NCAA) on Thursday evening.

A statement by the airline said: Arik Air hereby announce the normalisation of operations with effect from tomorrow, Friday morning on all routes.

The management equally apologise to its customer for the disruption of services today following the picketing of its operations by the unions.

Speaking on the development, Capt. Roy Ilegbodu, Chief Executive Officer of Arik Air said: “We sincerely apologise to our customers for the disruption of our operations today caused by the picketing of our services. We have resolved the issue with the unions and wish to inform the traveling public that our services will resume tomorrow morning.

“We reassure our customers of on time departure and great travel experience and look forward to welcoming them onboard our flights.”

Meanwhile the airline has reactivated its online platform for customers to book and pay online through all its network. The airline’s on time departure performance has improved to over 80% over the last three weeks.

On Thursday morning, the airline, under Receivership, had threatened legal action against any illegal interference in its operation, describing the picketing by the unions as illegal.

“We hasten to say that the motive of this picketing is unclear to Management and their action is therefore illegal. It is a well-known fact that Arik is under Receivership following  various challenges experienced over the last few years, which include delays and cancellations of flights, delays in payment of salaries and huge debts to trade creditors and suppliers, bad corporate governance and a host of others.

“In exercise of its statutory powers under the Asset Management Corporation of Nigeria (AMCON) act a Receiver was appointed over the affairs of Arik Air on February 6, 2017. With the assistance of AMCON, salaries are being paid including backlogs, on time performance has improved from 15% to average of 80% and fuel suppliers that hitherto quit doing business with Arik are happily doing business with the airline.  For the record, the Management had engaged with its staff and is convinced that there is no reason to picket our airline, which is facing challenging times.

“The focus of the Arik Air management is to stabilise the operations of the airline and enhance its ability to play a positive role in Nigeria’s aviation industry. Therefore the Management of the airline advises the unions to steer clear from undermining the operations of Arik Air. Management would take every legal measure at its disposal to stop any illegal interference with its operations”, a statement from the company had said on Thursday.

Meanwhile, some workers of the airline kicked against the unions’ stand, saying they were ‘not complaining’.

“Please note that no staff of Arik Air is in support of this unnecessary action. Members of staff are currently staging a counter protest to inform the so-called unionists to leave us alone. Now we have come out to say we didn’t mandate any union to agitate for us”, some staff said.