Reaction: An open letter by NUATE to the SGF on proposed merger of Aviation Agencies 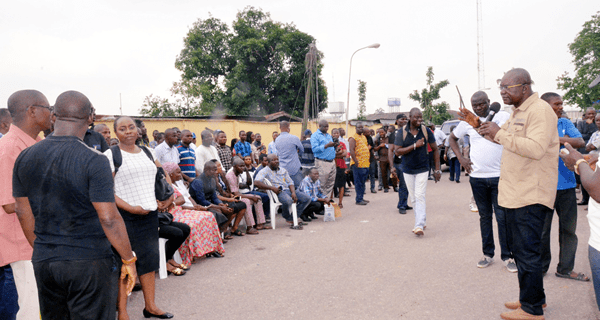 Reaction: An Open Letter by Comrade Ocheme Aba, General Secretary, National Union of Air Transport Employees (NUATE) to the Secretary to the Government of the Federation on Oronsanye’s proposed merger of agencies in Aviation Sector !

The Secretary to the Government of the Federation

THE ORONSAYE REPORT ON RESTRUCTURING AND RATIONANALISATION OF FEDERAL GOVERNMENT PARASTATALS, COMMISSIONS AND AGENCIES – IT IS IMPOSSIBLE TO MERGE NCAA, NAMA AND NIMET

I am to convey to you warm greetings from the President and the entire membership of the National Union of Air Transport Employees (NUATE), and to extend our sincere appreciation for your most commendable role in leading the Federal Government’s assault on the dreaded coronavirus pandemic as the Chairman, Presidential Task Force on COVID-19. We are prayerful that the efforts of your team and the collaboration of the global community will bring succor to Nigeria and the world very soon.

The purpose of this letter is to draw your auspicious attention to the aviation component of the above mentioned report in view of the recent approval for implementation of same report by President Muhammadu Buhari. The Report had recommended, among others, that Federal Government agencies be reduced from 263 to 161.

Sir, when the Oronsaye Report became public in 2013/2014, there was wide and wild outcry against its recommendations in the aviation sector across all segments of aviation stakeholders. The Report was seen to be clearly lacking in knowledge of global and national aviation set ups and trends. In particular, the Report was well out of sync with the fundamental objectives and primary trusts of the Nigerian civil aviation policy as encapsulated in the Nigerian Civil Aviation Act; the Act being product of the effort of many years of concerted struggle by erudite aviation gurus.

In simple and straightforward terms, the recommendation that “the trio of the Nigerian Airspace Management Agency (NAMA), Nigerian Civil Aviation Authority (NCAA) and the Nigerian Metrological Agency (NiMet) be merged into a new body to be known as the Federal Civil Aviation Agency (FCAA)…” is outrightly not implementable. These are the reasons.

The NCAA is a regulatory body. The NCAA is to aviation what CBN is to the financial sector, or what the DPR is to the petroleum sector, or what NIMASA is to the maritime sector. On the other hand NAMA and NiMet are aviation service providers which are in fact regulated by the NCAA. A merger of NCAA, NAMA and NiMet into FCAA would mean that FCAA would be both a services provider and a regulator all at once. It would indeed be absurd to expect an agency to regulate itself and not expect objectivity to go out the window.

Such merger as proposed would be like merging the CBN with the Bank of Industry and the Bank of Agriculture, or merging the DPR with the NNPC and PPMC. These cannot be contemplated under any serious circumstance.

The competencies required for the headship of NCAA are immutable, but different from that of NAMA and NiMet. Therefore, the fear is real that the merger will compromise the strict requirements of competences for the office of Director General of NCAA due to competing influences from the other segments of the improbable merger, leading to serious questions about proficiency.

The International Civil Aviation Organisation (ICAO) has very clearly defined functions for a State CAA of which airspace management and weather forecasting are not part. Besides, the independence of a State CAA is of fundamental importance in determining the capacity of the CAA to function effectively by ICAO standard. In this regard, it needs no soothsayer to know that such merger will suffuse the regulatory functions of the CAA with aviation services that normally fall under the supervision of the Ministry of Aviation and thereby stifle the independence and objectivity required of a State CAA by ICAO.

On the other hand, the idea of merging NCAA with other aviation agencies is anathema to the hard work of many years by various aviation stakeholders, including successive Ministers in charge of aviation to build the NCAA into its present form of global reckoning. The proposed merger if implemented will jeopardize this hard work of many years and retard the progress towards the full autonomy of the NCAA.

The kind of situation above will most likely lead to erosion of confidence and possible loss of various strides and global certifications previously obtained by the NCAA. This would be an unnecessary risk.

Similar to the case of the NCAA, it would indeed be abnormal and unworkable to merge Nimet with any other aviation agency. In the first place, NiMet services are utilized by practically every facet of national life; agriculture, mining, construction, sports, marine, of course aviation, and all others, including even event planning. Therefore, to merge NiMet with any aviation agency would create a serious identity crisis. For instance, the proposed merger which includes NiMet is to be known as the Federal Civil Aviation Authority. The big issue is that NiMet cannot successfully wear the toga of civil aviation. This is a fact.

Again, just like the case of the NCAA, merging NiMet with another aviation agency would pose serious challenge of determining the appropriate competencies required to manage such an admixture.

All in all, it would appear that the merger proposed for aviation by the Oronsaye Report was heavily overbalanced on the side of the need to reduce cost of governance by all means. In doing so, service delivery by the agencies involved, and the workability of the merger have been gravely overlooked. The noble goals and fundamental objectives of Nigeria’s civil aviation policy were also overlooked, all to the nation’s peril.

Based on the foregoing, it is our considered view that wholesome implementation of the Oronsaye Report and its White Paper as it pertains to aviation will precipitate a crisis of immense proportions capable of capsizing Nigeria’s forward march in the sector, especially considering recent gains by this Government. Such a crisis would be an unnecessary distraction at this time and should be avoided.

May we, therefore, humbly request a complete halt of the implementation of the merger of NCAA, NAMA and NiMet. We are confident that, should Government choose to subject the proposed merger to objective scrutiny, the issues deposed as foregoing will be found to be indisputable and abiding. Very importantly, our submission will be found to be not in support of any selfish objective other than national good.

May we also count on your well known sound judgement to guide you aright in this matter for the sake of our dear Country, Nigeria.

Please count on the assurances of our highest regards as always.