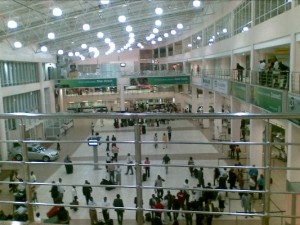 The Ministerial Committee on Airport Security has affirmed its support for the commencement of regional operations at the Murtala Muhaammed Airport Two (MMA2), Lagos, which is being operated by Bi-Courtney Aviation Services Limited.

The Air Commodore H. Tukur-led committee, which was set up by the Federal Government to assess the security situation in all Nigerian airports, also expressed satisfaction with the level of security at the terminal.

The committee, which visited MMA2, last Thursday, observed that the facilities at the airport were comparable to any at other top airports around the world.

While also confirming the readiness of MMA2 for regional operations, the committee noted that nothing should have warranted further delay in the commencement of international operations at the terminal, judging by the facility that have been provided by Bi-Courtney for the purpose.

The committee was received by the Chief Operations Officer, Ms. Adebisi Awoniyi, the Chief Security Officer, Mr. Olayinka Olatunji and other senior management staff of Bi-Courtney.

A member of the committee, Engr. Akin Olateru, who spoke on behalf of his colleagues at the conclusion of their tour of the terminal, further commended efforts by the terminal operator to enhance passenger facilitation, noting that it matched the best in the world

Explaining the purpose of the visit, the committee observed it was part of the pro-active measures put in place to identify and address security challenges across the nation’s airports.

Its terms of reference include, identifying deficiencies in the overall aviation security performance of individual airports and assessing the risks associated with such deficiencies; providing prioritised recommendations to assist individual airports in addressing identified deficiencies; review Nigeria’s Civil Aviation Security Architecture and identify weaknesses; determine the vulnerability or otherwise of the nation’s airspace and proffer solutions to ameliorate identified gaps; identify the vulnerability of the nation’s airports to security breaches and suggest ways to fix them; carry out security survey of the nation’s international airports with a view to enhancing the implementation of security provisions in line with the Airport Security Programmes (ASP), NCAA and ICAO provision.

The committee is also expected to assess the nation’s international airports security performance, in terms of the level of implementation of the critical elements of an aviation security oversight in line with ICAO Standards of Annex 17 and Security and the relevant security-related standards of Annex 9; and examine other issues related to security not covered by the above terms and proffer solutions among others were part of the terms of reference of the committee.

Areas visited by the committee during the assessment tour include, the ticketing hall, regional arrival and departure areas, the screening point and other security formations, the car hire area, drop-off zone, the self-check-in kiosks and the electronic screening machines.

While addressing the committee, Awoniyi commended the Federal Government’s initiative, while noting that Bi-Courtney has over the years invested a lot in maintaining security and other infrastructure at the terminal.

She stressed that airport security and safety are key areas that the company had never taken for granted, adding that the company is currently undertaking an extensive upgrade of CCTV camera for the entire terminal, due to the dynamic nature of airport operations and the introduction of new technology.

She also told the committee that approval for regional operations at MMA2 was granted by the then Minister of Aviation, Chief Osita Chidoka, in May 2015, while Bi-Courtney had invested over N200m in getting the terminal ready for the commencement of the operations.

She further stated: “All relevant security agencies, including Customs, SSS, Immigration, NDLEA and others have their offices ready for the regional operations, while some of them have, in fact, deployed personnel in the terminal. Some have also installed their scanning equipment and are ready for the commencement of operations.”

“The truth is, starting regional flight operations at MMA2 is a win-win situation for all the parties involved. It is particularly beneficial for the airlines operating from MMA2 and Nigerians as a whole. The airlines are groaning under the weight of additional cost of having to use the international terminal to operate such flights. These airlines use the same aircraft for their domestic as well as their regional operations, so consolidating the two operations in one terminal will ensure drastic reduction in their operating cost.”