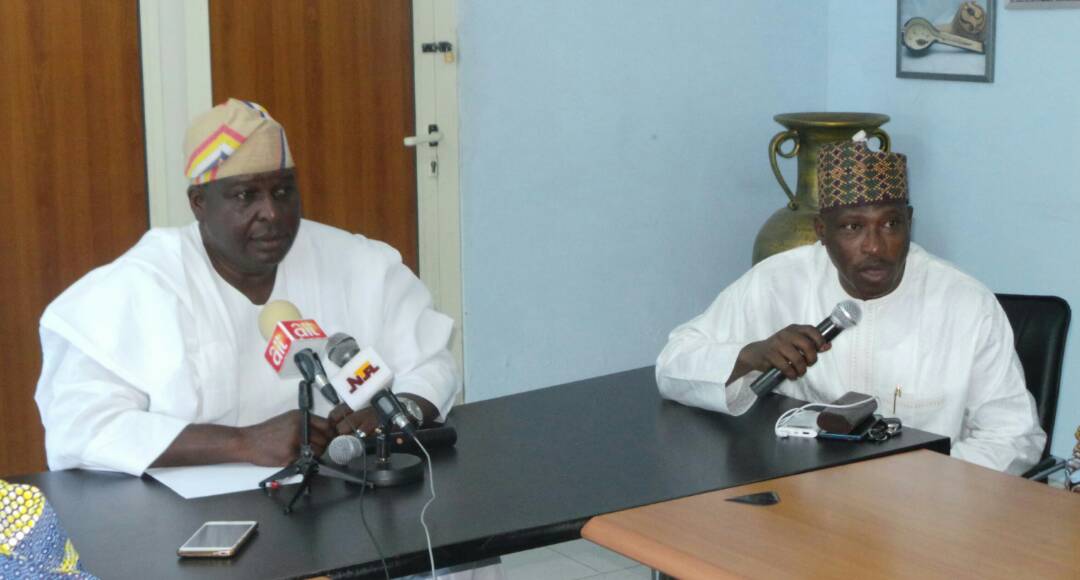 Director General of the National Council for Arts and Culture, Otunba Segun Runsewe and FTAN President Alhaji Rabo Saleh at the meeting with NATOP BOT

The Director General of the Nigerian Council and Culture and the President of the World Craft Council Africa, Otunba Segun Runsewe, has met with Nigeria  Association of Tour Operators (NATOP) Board of Trustees (BOT) in order to resolve the Problem with members.

Otunba Runsewe had invited leaders of the agitators and NATOP AGM to Abuja in order to listen to both sides and resolve issues identified. He told the leaders that NATOP is his baby as he licenced members of the Association in 2011 when he was the DG of NTDC and has kept close taps with the affairs of the group. He has also received 2 awards from NATOP in the last two years so he feels obligated to intervene so he said in his message of invitation.

Before meeting with Otunba Runsewe the BOT had met at the instance of Kabir Malan the President of the Association of Tourism Practitioners of Nigeria ATPN who is a member of the Board. He wants the Board to address the issues raised in the petition circulated by the agitators. The meeting will be the second one since the induction of the BOT. The first meeting was attended by all Members except Iyom Josephine Anenih. The meeting started with Kabir listing the issues and asked for Responses from the former President who is now the Chairman of BOT. The first issue resolved was the Constitutionality of the AGM. Mr Nkereuwem Onung outlined the requirements for the AGM and how the Jos AGM met all the rules. The two weeks extension and extensive Publicity in the media gave every member enough time to attend.

The issue of Composition of BOT he said was also constitutional as membership is minimum of 7 people and it has a National spread with members from all Geopolitical Zones and no association has a more qualified Board. The general house adopted the BOT with an Unanimous vote with a motion moved by Mr. Owolabi.

On the issue of Chairman of BOT, Kabir asked if any member is opposed to Mr. Onung being the Chairman and none was raised. It was reaffirmed that Mr. Onung remains the Chairman of the BOT. The issue of the account was also discussed and Mr. Onung  said that the full house adopted the audited account that was presented to the house with a motion moved by Mr. Tunde.

The issue of quorum was raised and addressed. Over 40 members registered for the AGM and out of the 60 members in the  books only 15 members in Lagos were up to date with fees. According to NATOP constitution only 16 members of the members qualify to participate in the Election going by the 2 year rule. The rules also state that one third forms a Quorum. So 10 members satisfy the needed Quorum for the Election to hold. Mr. Onung told the house that the petitioners identified that both ATQ and Akwaaba were legitimate members of the Association as they were copiously quoting both organisations in their letter unless they had issues with the link of the firms to Mr. Ikechi Uko. He also said that the same people who were against the formation of FCT chapter are turning around to say the leader of the FCT chapter who was registered in 2011 by NTDC is no longer a member of the Association.

About embezzlement of N10 million from Plateau State and an unnamed sum from Cross River State, Mr. Onung said he doesn’t know about any payment to NATOP by the two states named. Plateau State he said promised to host NATOP and they did as they promised putting up a great show. No donation has been received from them though the Association is expectant of such support. About Cross River State he said the only payment he heard that was made by Cross River State was to a former NATOP official who was paid N5million for a job that was not done but that he said is private business and does not involve the Association. So he does not know the money they claimed was embezzled because as that day no money has been received from any non member.

After the presentation by Mr. Onung to the Board, Mr. Ikechi Uko presented his own petition to the Board. He told the house that his name and Business has been targeted by the agitators that it looked like the whole thing is targeted at him. He pointed out that no mention was made about any other company in the petition except for his own. He said he has names of the persons involved Transcripts of the chain mails and members of the WhatsApp group. He listed what he termed as an evil Conspiracy that started in 2016 in Ibadan. When it was decided that NATOP be collapsed or merged with another association. Another meeting he said was held in South Africa to stop Akwaaba and launch another Travel Expo.  Four meetings were held in Abuja on how to raise funds to support the new Expo to rival Akwaaba.

In November last year in Lagos the core members of the conspiracy met to formalize the plot. They decided on new leadership for NATOP sharing out the Top post amongst themselves. They formed a WhatsApp group and an email chain. They pledged to raise N3million to prosecute the project. They designed Narratives to use in Recruitment of unsuspecting Members. The narratives were  anchored on 4 points. 1. Mr. Onung doesn’t want to handover 2. He wants to handover to Ime Udo his sister from his state. 3. NATOP is not working 4. They are too old to handle the Association so it is now a family property. Mr. Ikechi is too powerful and should be expelled from NATOP along with the whole Executives. This plot is similar to a successful plan used by another association to subvert its Constitution and install a President

From November they started de-marketing the executives and the Association culminating in the aborted Coup of February 2018. With these plots in place the agitators were taken aback when the Abuja branch was launched. It put a spanner in their works  which was why there was an intense hostility towards taking in New members. Why would NATOP reject new members.

When the President announced that the AGM will hold in Jos Plateau State the Conspiracy floundered. If they were genuine members they would have paid their dues and attended the event in Jos to effect the changes they wanted but they chose not to attend. Those that attended and participated in all the processes are now laying false accusations because they didn’t get their wishes. Mr. Uko said that it is office that the Problem has nothing to do with the AGM and processes but a plot to to work towards an answer and the petition is a lash out at persons they think frustrated their plan hence the ferocious attack on his person. He said he wants an apology. Hajia Fatima Garbati encouraged Mr. Ikechi Uko to ignore the distractions and concentrate on his Business.

It was agreed by the BOT to accept the mediation by Tourism Elders including the DG Otunba Runsewe, FTAN and Chief Amachree Nigeria’s Father of Tourism. The President of NATOP was asked to call for a general meeting in July of members who were up to date on the AGM. A committee was to look into the criminal and illegal filming of the meeting.