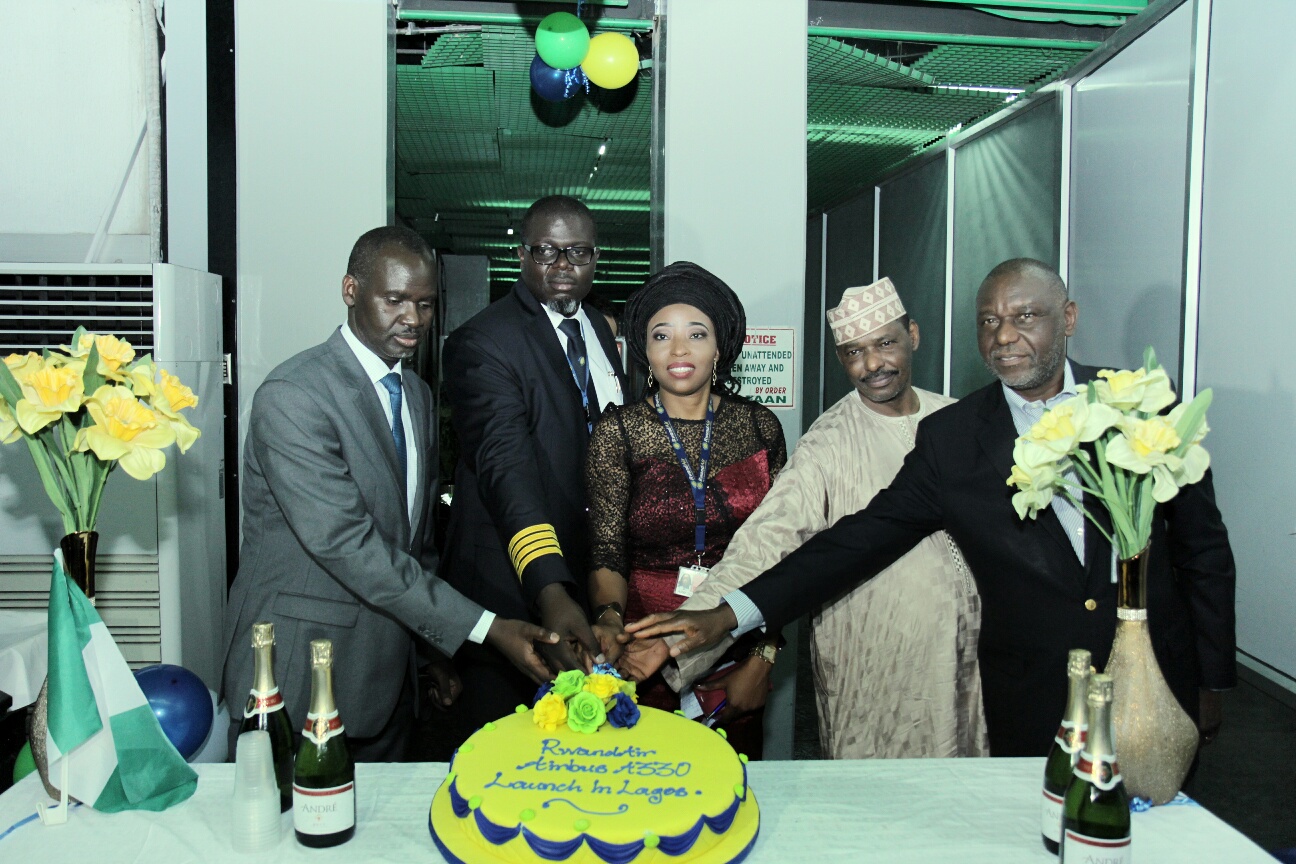 ….High Commissioner says intra – African connectivity will boost trade, tourism
By Sade Williams
In an effort to capture the African air transport market; Rwand Air newly acquired Airbus 330 – 200 yesterday,  landed at the Murtala Muhammed International Airport, Lagos.
The aircraft flew in passengers from the Kigali , the capital of the East African country ; its major hub into Lagos, its hub for West Africa .
The new aircraft is the latest addition in the fleet of nine airplanes by the ambitious carrier set to take over the African skies with new product offerings ranging from competitive fares to extra luggage allowance for its teeming passengers .
Speaking at an  impressive  welcome ceremony at the international wing of the Lagos Airport, Rwand Air , Country Manager, Ms Ibiyemi Odusi said the arrival of the Airbus 330 – 200 is one the steps taken by the airline to consolidate on the Nigerian route with attractive packages that would make the carrier the preferred choice by passengers .
She said the configuration of the Airbus with Flat Bed on the Business Class,  luxurious space at the Premium Economy Cabin and other seats in the Economy Cabin makes the 244 passenger seat aircraft the best on the Nigerian – Kigali and other routes the best . 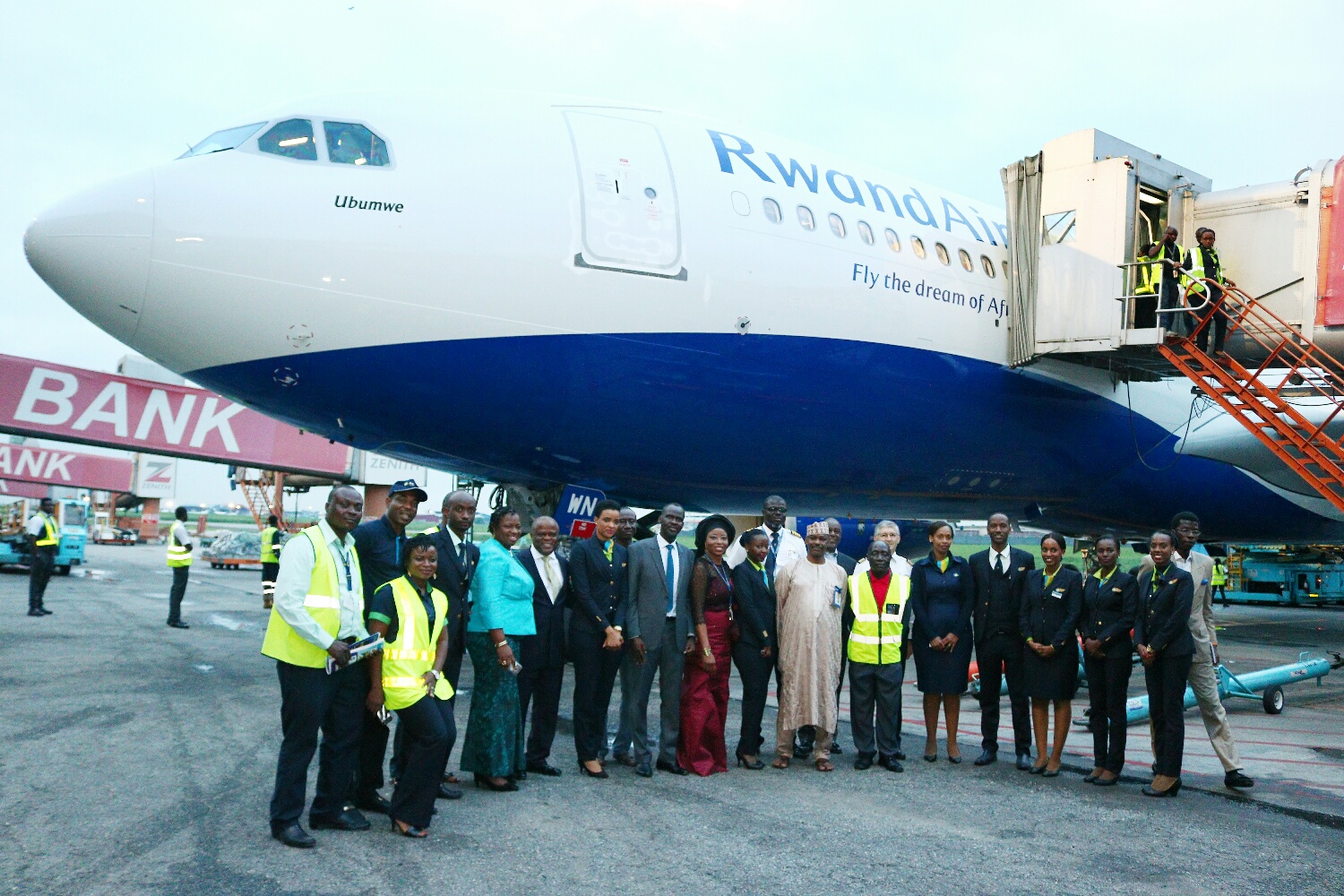 The aircraft has 20 economy seats, 21 premium economy and 203 economy seats .
Odusi called on Nigerian passengers to continue to patronise Rwand Air to destinations within and outside Africa to enable the airline resolve the lingering challenge of flight connectivity within Africa .
She said Rwand Air will next month take delivery of another new aircraft to enable it actualise its plans to open new routes within Africa into Middle East and Asia as well as open new routes into Europe in 2017.
Also speaking at the event, the Rwandan High Commissioner to Nigeria , Ambassador Stanislas Kamanzi described the arrival of the Airbus into Nigeria as a milestone by the East Africa carrier, saying the aircraft is part of efforts to improve the national carrier of the country in offering seamless connections into and out of Africa .
He said Rwand Air will take delivery of another aircraft next month to enable the airline contribute its quota in growing air transportation in Africa .
Ambassador Kamanzi said : ” We have to thank Nigeria for accommodating Rwand Air , and for allowing our airline develop  Lagos as a hub over West Africa . From Lagos, we have expanded our operations into Ghana, Conakry , Abidjan .
“There is necessity for Africa to be inter connected by air . A situation in which African countries still have problems of intra – country flight connectivity is unacceptable . Such difficulties in intra – African connectivity remains a huge challenge , wasting valuable time, resources that could be used to develop Africa .
“With this aircraft, people and business could move across borders “
In his comment, the General Sales Agent ( GSA ), and Chief Executive Officer of APG, Mr Babatunde Adeniji said the arrival of Rwand Air Airbus 330 – 200 into Nigeria will add value to air travel in terms of quality of service .
Present at the event is the Director , APG Global Associates , Mr Femi Adefope and a Director with the Nigerian Civil Aviation Authority ( NCAA), Captain Abdulahi Sidi .
2016-10-10
Sade Williams