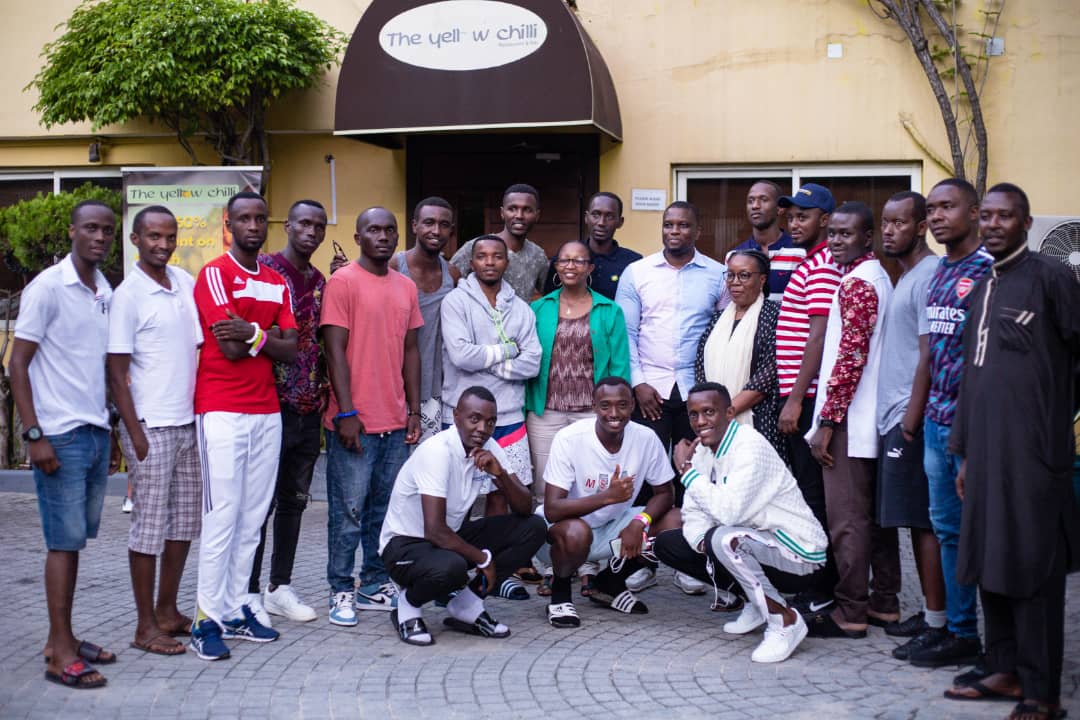 Mr. Muhamud Wayiga, the Country Manager of RwandAir, Nigeria, was on hand to receive the team upon arrival in Lagos.

He said, “The background to this initiative began in 2019 when Shell Football Club travelled to Kigali to play a tournament with RwandAir FC. It went very well and the two teams decided that there had to be a return match. So, at the end of the day the team from Kigali is fulfilling that decision to return the play off match with Shell FC and now joined with NFC FC, an exchange that fits very well into the ecosystem of the airline in order to promote sports within corporate companies.”

He further went on to say that “Sports plays a very important role in improving culture and the physical atmosphere of employees and this is a very good initiative that has started and our colleagues are putting in the energy. Moving forward we shall continue to promote this kind of initiative to integrate sports in the work environment to involve our employees in the culture of sports as a way to motivate them through physical exercise to not only improve personal productivity but also to use the corporate interactions as an avenue to network with corporate organisations to enhance our business”

“I work hand in hand with the Chairman of Sports at RwandAir to implement any sports initiative. And as we go out there to look for business, we consider the sports element as well. Based on the National Rwanda Sports Development Policy, ‘Sport plays a significant role in the development of communities; it brings people together to interact, play and engage in conversations that build social harmony. Sports positively impacts on social development and economic sustainability; they empower people and teach leadership and citizenship skills while inculcating cooperation toward shared goals. They challenge inequalities in gender, race and disabilities and can be a means to educate young people against anti-social behaviour.’”

“Rwanda has a large youth population; about 29% between the age range of 16-30 years and 40% below the age of 15. This relatively large young population has to be kept busy and disciplined by getting them involved in sporting activities. You will note also that more than 60% of the team from Kigali are very young. So while we are looking for the revenues for the Airline, we try to embed the culture and the physical well-being of the individuals and as the saying goes, the sky is not the limit”, he noted.

Chairman of Sports in RwandAir, Mr. Geophrey Karuhanga said; “Since we started this initiative, we have gotten many invitations to play in other countries. We have developed sports activities and teams as employees of RwandAir. Sporting gives life and it is friendly and promotes cultures. We have a slogan that says; ‘we either win or they lose’. So, there is no option of losing. We are ready and that is why we are here.

The Team Captain of the Club, Mr. Kaberuka Jean-Bosco said: “This is my first time in Lagos to play a tournament and I like the local people here. Lagos is a fantastic city with vibrant and caring people. The food is good, but the problem is pepper. We have two teams to play with, NFC and Shell FC. RwandAir FC was established four (4) years ago and I am among the founders and Captain of the club. Sports is life and the team is like a family. We look out for each other. Our goal is to win.”

The football match was played between the 3 football clubs in a five-a-side football pitch at Northern Foreshore Estate, Lekki. Each football club was divided into two teams; Team A and Team B. Each Team played 2 matches in the first round, making it a total of 6 matches played.

In the first round, RwandAir FC played against NFC FC and Shell FC with the following results:

After the first round of matches, the semifinal was played between the two opposing sides of Shell as well as between Rwandan FC against NFC, which ended goalless and went into penalty shootout. In the end, NFC FC won the penalty shootout with 3 goals against 2.

From the final results, Shell took the day as Winners of the tournament. NFC FC emerged as 1st Runner-up followed by RwandAir as 2nd Runner-up. It would be recalled that the last time Shell went to Kigali for the maiden tournament in 2019, RwandAir FC won by 7 goals.

Mr. Geophrey Karuhanga used the opportunity of the games to reveal that in November 2022 three (3) teams will be going from Nigeria to Kigali to play with the team from Rwanda. “So, we are not stopping. We have teams from Ghana, Tanzania and Ethiopia who want to come and play with us. And apart from sports, RwandAir gets a lot of visibility and marketing and this increases our revenue,” he concluded.