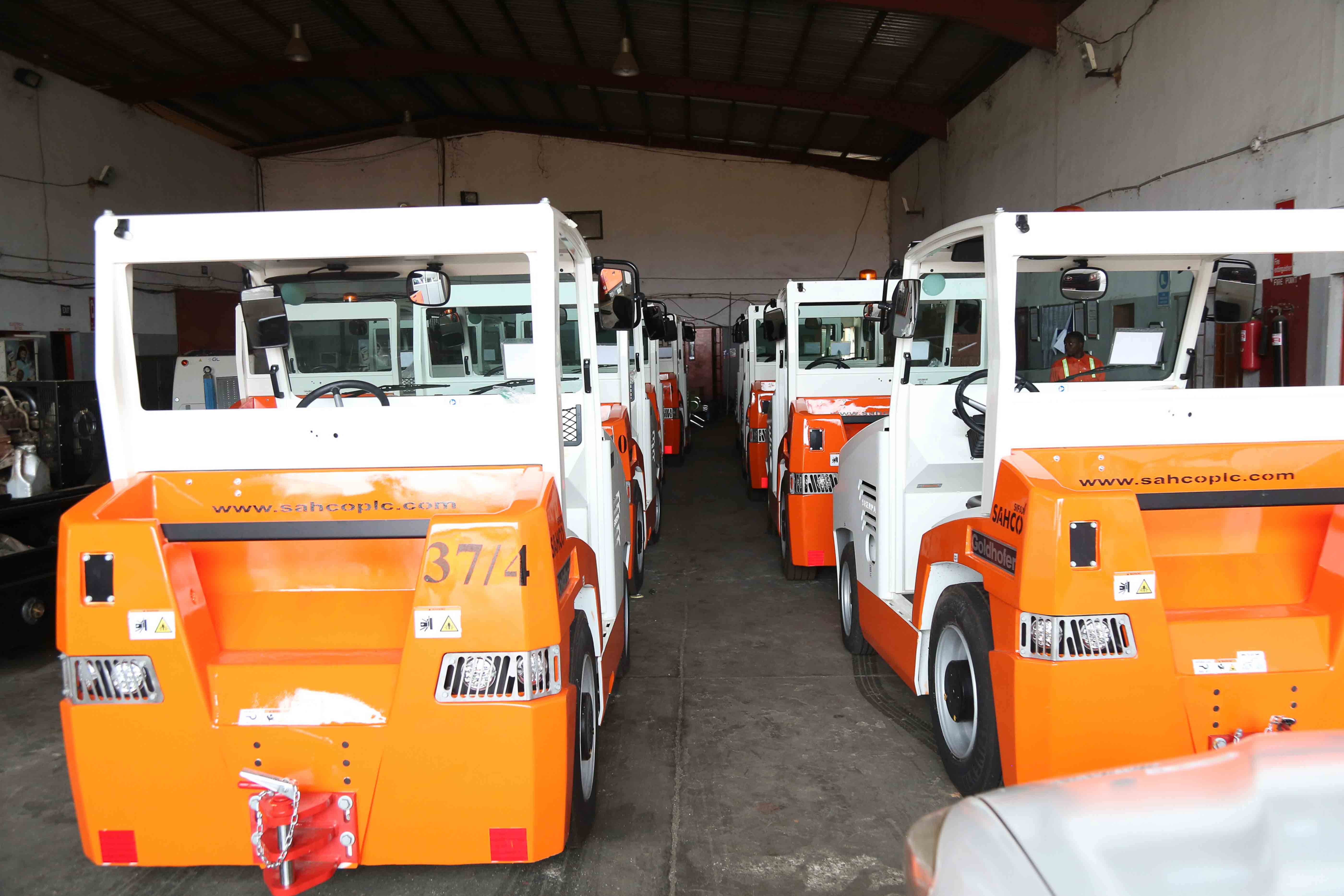 The Skyway Aviation Handling Company PLC (SAHCO) has acquired a fleet of brand new Baggage tow tractors. The tow tractors which has the capacity to convey up to 40 tonnes of baggage or cargo, is the best of its kind in aviation ground handling equipment in Nigeria.

The Baggage tow trucks which were manufactured in Germany combines comfort, safety and flexibility with the latest technology. It can convey up to 45 tonnes of baggage and cargo on a level ground and up to 40 tonnes on wet or hilly surfaces.

Furthermore, the Baggage tow truck is equipped with a tier 4 compliant engine which is to significantly reduce emissions of particulate matter and Nitrogen to near zero level. This is to abide by the European Environmental agency policy, while it was being produced thereby making it environmental friendly with little or no emission.

In addition, the Baggage tow tractor is very user friendly, prevents hernia and is very durable and rugged.

Apart from SAHCO’s massive constant investment in trailblazing Ground Handling Equipment, it is also worthy of note that SAHCO’s team of engineers have manufactured various equipment with locally sourced materials some of which include fuel bowsers, toilet bowsers and baggage carts to further boost client satisfaction and to ensure speedy service delivery.

The company’s immense investment in technology which has resulted in excellent performance has received a lot of accolades from various bodies across the world. Recently, SAHCO was adjudged ‘The best Ground Handling Company in West Africa’ during the 5th Accraweizo 2019, and was awarded ‘The most Innovative Ground Handling Company in Nigeria’ by The League of Airports and Aviation Correspondents (LAAC).

Also SAHCO won a Service Provider Recognition award in the Indian Sub-Continent and Africa from Etihad Airways. The Lagos Station was awarded the best in on-time performance and excellent service delivery thereby beating the Asia region who has always been leading.

Speaking on the success of the company after the privatization, The Director, Development Institutions & Natural Resources, Bureau of Public Enterprises, Mr. Chigbo Anichebe, who expressed the agency’s excitement over the outstanding performance of SAHCO during a routine post-privatisation assessment tour in Lagos, recently, particularly observed that SAHCO was doing a lot better than expected nine years after it was privatized.

SAHCO, formerly known as Skypower Aviation Handling Company Limited, was carved out of the liquidated Nigeria Airways Limited as part of the Nigerian Federal Ministry of Aviation’s Reform of 1996. On the 23rd of December 2009, SAHCO was handed over to the Sifax Group by the Federal Government of Nigeria, after a keenly contested privatization in which Sifax Group came first as the preferred bidder with the sum of N5.52 billion Naira. The company was listed on the Nigerian Stock Exchange on the 23rd of April 2019.

SAHCO is involved in all the activities that takes place from the time an aircraft touches down on the tarmac to the time it is airborne, while also ensuring that Aviation Ground Handling services is carried out in an efficient, speedy and safe manner by deploying the right tools.