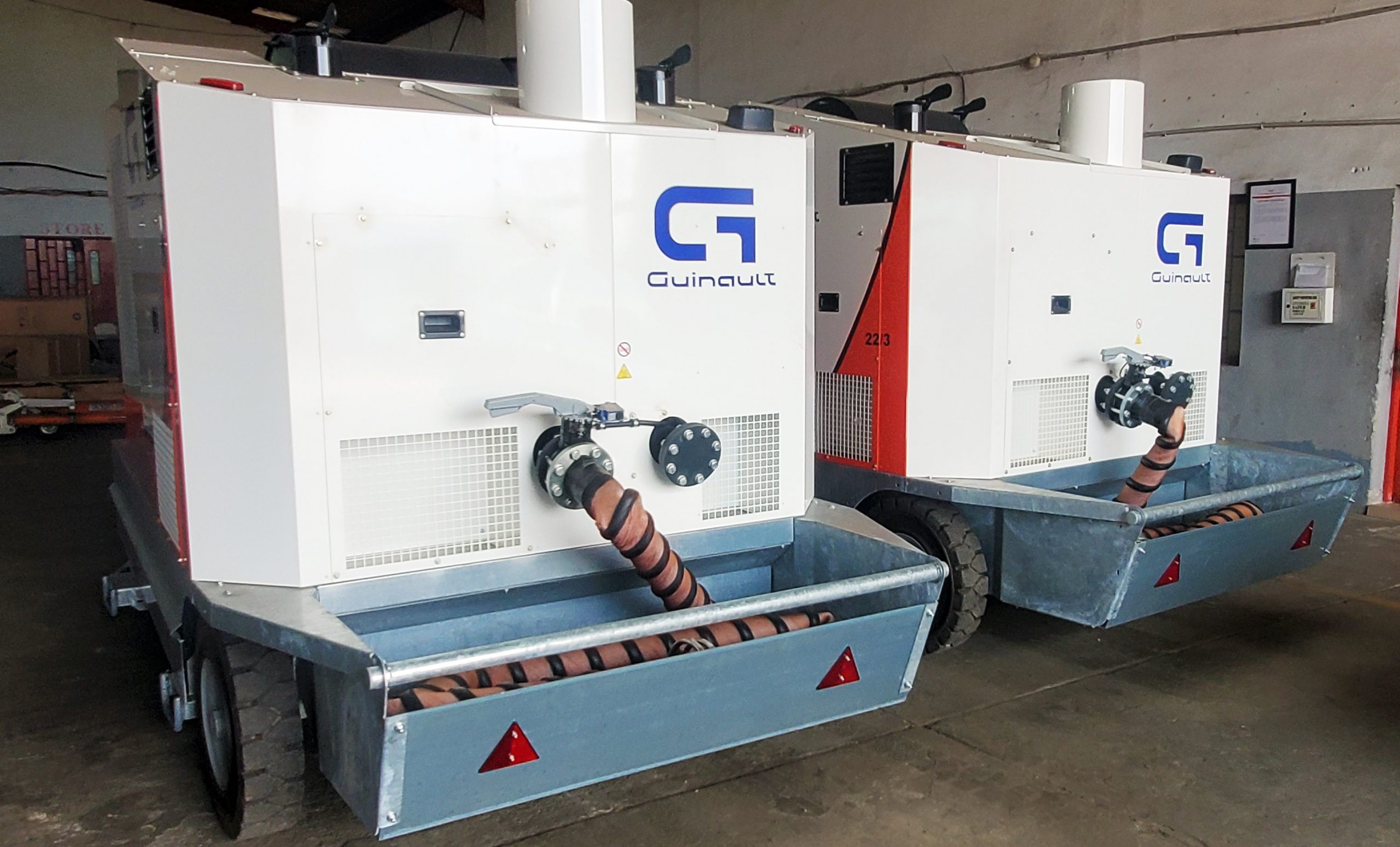 The new Universal loaders which were manufactured by French Ground Support Equipment (GSE) maker, Air Marrel in France are 7,000 tonnes lower and main deck loaders. The GSEs are well-matched with the latest compatible standards and can be used to load both pallets and containers. Also, the loaders are equipped with Aircraft Approach sensors that minimizes accident or damage to the Aircraft body by restricting contact.

The three ruggedly built GSEs also known as E-LAM 7,000 are fitted with tier 4Deutz engines and the capacity to travel long distances that makes them compatible for Nigerian terrains and long distanced tarmac. The E-LAM 7,000scan similarly be used for loading at both the front Cargo hold and at the rear Cargo hold.

In addition, SAHCO acquired three Air Starter Units (ASU) equipment from Guinault, a GSE manufacturer resident in France. ACUs are used to start an aircraft’s engine while it is on ground. The ASUs acquired by SAHCO can power both wide body and narrow body aircrafts. They are also fitted with tier 4 Deutz engines with low emission of carbon monoxide and are built to produce 180pounds per minute of power. Furthermore, the ASUs are built with aluminum chassis which is to prevent rusting thereby making them an all-weather equipment which can be used under the rain or the scorching sun.

Similarly, 6 Sherpa Tractors were procured to boost the existing fleet of GSE in SAHCO. These tractors are built to service both Cargo and Passenger Baggage. The front wheels of the tractors have been modified to be bigger than the older models to enable a better stability of the equipment and to suit a rough terrain better, besides the seats have in-built leaf springs to ensure that the operator is comfortable driving the equipment thereby preventing any work-related development of hernia due to hard and immobile seats.

Likewise, the GSEs are fitted with tier 4 Deutz engines for low emission of carbon-monoxide which makes them environmentally friendly. The Tractors which were produced by Goldhofer from Germany are built to have low fuel consumption capacity. Also, SAHCO added 50 Container Dollies manufactured by Bombelli, an Italian GSE company to the new fleet of GSEs, these Container Dollies are used to transport Unit Load Devices (ULD) during Operations. The Dollies are made of galvanized steel to prevent corrosion and rusting and are fitted with spring loaded hooks which makes connection and pulling easy for operators.

Similarly, the Canopied Passengers Steps and Conveyor Belts were manufactured by Bombelli. The three Canopied Passenger Steps have factory fitted Coverings to protect Passengers from the rain or scorching sun while embarking or disembarking and they are also fitted with Aircraft Proximity sensors in accordance to world best practices. The Passenger Steps also have the capacity of being motorized or manually operated and can be used to service the following Aircrafts; B737, B727, B757, CRJ, A318 – A321.

.In addition, the three Conveyor Belts which are used for loading and offloading of baggages, are equally fitted with In-built Aircraft Proximity Sensors. Also, the roller belts are manufactured in a block assembly fashion which makes the GSE to convey loads faster, carry more weight and last longer. Speaking about the equipment, the Managing Director/CEO of SAHCO, Basil Agboarumi said SAHCO is committed to always providing safe, speedy and efficient services for clients and prospective clients. 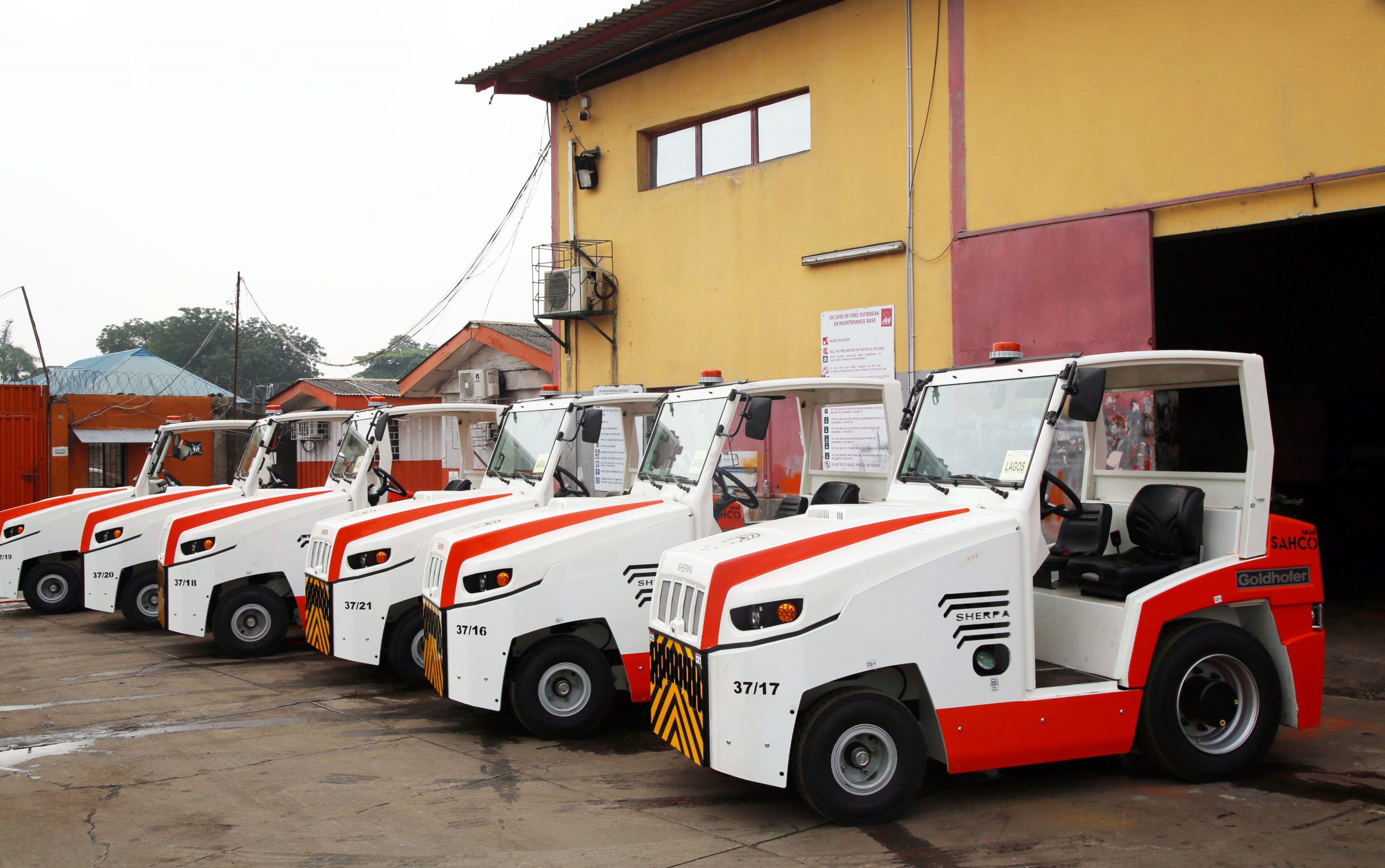 Furthermore, as SAHCO clients are expanding their routes, we are also ensuring that we are exceeding their expectations by expanding our fleets too. We are constantly training our staff both abroad and locally to learn how to operate and maintain these new equipment so as to maximize their productivity. Recently, SAHCO won the Best Ground Handling Award in Africa at the AviatorsAfrica Conference in Johannesburg, South Africa in recognition of SAHCO’s immense contribution to the development of African Aviation. SAHCO was nominated with three other Ground Handling Companies after which SAHCO won with a landslide due to SAHCO’s continuous input in ensuring that all activities are executed according to best world practices.