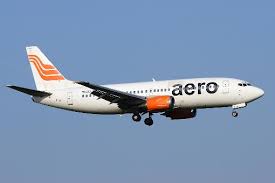 The Senate on Wednesday, asked the management Aero contractors to recall the suspended chairman of the Air Transport Services Senior Staff Association of Nigeria (ATSSSAN) branch of the airline.

In an appreciation letter signed by Olayinka Abioye, acting general secretary, National Union of Air Transport Employees (NUATE) and Omotaje Olawale, for ATSSSAN, the union members commended the leadership of the Senate and the committees on Aviation and Anti-Corruption for their apt intervention in the rift between Aero and the unions.

The members, which also appreciate the directive to Aero management for the recall of its chairman suspended by the airline, said such goes to show that the National Assembly continues to be the hope for the poor, common and ordinary man.
The members however said that they have also received a notice from the Industrial Court taking on the union on the same issue that the joint committee in the National Assembly has directed on.

The Travel Port recalls that Aviation unions and workers of Aero had two weeks ago, declared the Chairperson of the Board of the airline and other members brought in by Asset Management Company of Nigeria(AMCON ) persona non grata for allegedly mismanaging the airline and refusing to review the over eight years old organogram that has outlived its usefulness.

Benjamin Okewu, President of ATSSSAN had posited that board members brought into the airline were not helping matters as they were allegedly busy collecting money and not bothered about the sustenance and survival of the airline.

In the ensuring milieu, Aero contractors management reported the activities of two main aviation unions, Air Transport Services Senior Staff Association of Nigeria (ATSSSAN) and National Union of Air transport Employees (NUATE), to the Labour and Productivity Ministry, the Aviation ministry, Nigerian Civil Aviation Authority (NCAA) and State Security Service (SSS), over what it called ‘unwholesome practice of these Associations’, saying it poses threat to safety in the organization.

In a statement signed by Iyene Amapakabo, Acting Managing Director of Aero, the company had alleged that the members actions were against the organisations regulations adding that they were portraying the airline in bad light by releasing sensitive information to the public.

He explained that on one instance, the unions requested to dialogue with the airline, only for them (unions) to protest in the premises of the company in presence of customers without prior notice.