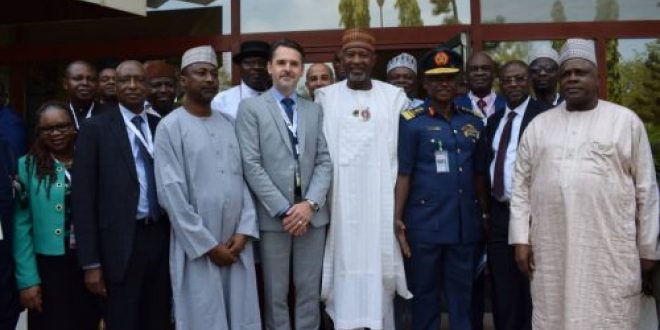 The Federal Government of Nigeria has pledged to collaborate with relevant stakeholders in the aviation industry in a bid to ensure the continuous safety and seamlessness of air navigation in the country.

The Minister of State, Aviation, Senator Hadi Sirika who made these remarks Monday while declaring open the 29th International Federation of Air Traffic Controllers Association (IFATCA) Africa and Middle East Regional Meeting at Transcorp Hilton, Abuja said government was prepared to partner with the international body of air traffic controllers in a bid to ensure safe skies both in Nigeria and globally “given that the job of an air traffic controller is both crucial and critical to the overall safety of air travel.”

Sirika, who was accompanied to the event by the Permanent Secretary in the Ministry, Alh. Sabiu Zakari and heads of aviation parastatals assured the delegates that the federal government would implement the outcome of their deliberations as “IFATCA remains a critical stakeholder in the global aviation family.”

Earlier in his welcome address, the President of the Nigerian Air Traffic Controllers Association (NATCA) Mr Victor Eyaru said the gathering would “focus mainly on intensifying efforts to achieving unbroken air safety within our region and beyond and this requires the collaborative effort across the borders to ensure seamless, safe and efficient air navigation.” He lamented however that the Africa and Middle East region which has more than 15% global population contributes marginally to global air travel adding that the time had come for the region the put its act together and take up the challenge.

Also in his remarks, the president of IFATCA, Mr. Patrick Peters noted that as a global body, the association has acted like a think-tank to the International Civil Aviation Organization (ICAO) by providing invaluable recommendations to the body from the rich expertise of its members. He charged air traffic controllers to strive for excellence in order to make the profession contribute more meaningfully to the growth of the industry.

Founded in 1961, the aim of IFATCA is to coordinate the activities of members and ensure seamlessness and uniformity in operations globally.

Hosted by NATCA, the five-day event with the theme “Seamless Friendly Sky” would dedicate the last two days to intensive training of members designed to bring them up to speed with latest developments in air traffic control.