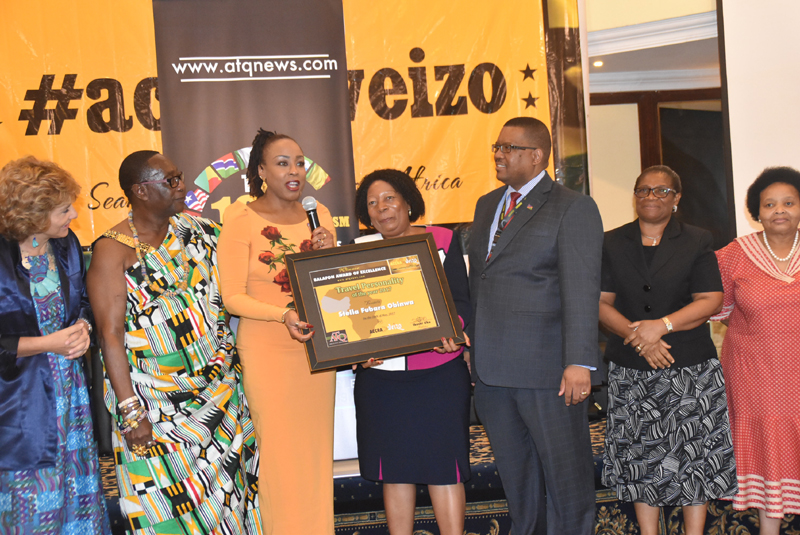 Stella Obinwa, Director of International Operations in charge of Africa for Dubai Tourism, has won the Travel Personality of the Year for West Africa at Accra Weizo event held at La Palm Royal Beach Hotel in Ghana.

Also at the event, Kempinski Gold Coast City Hotel in Accra Ghana was chosen as the best Hotel in West Africa.

Togo based ASKY Airlines was voted as the Best Airline in West Africa and SAHCOL as the Best Handling company.

The event in Ghana, which was chaired by His royal Highness, a former Ghana’s tourism minister, the Nene Nagai Kassa VIII, Honourable Mike A. Gizo, Chief of Agomeda, and President of Shai Traditional, saw Carnival Calabar Queens from Cross River State Nigeria send the audience wild with excitement as they entertained.

Ghanaian drum dancers equally entertained the audience while the Ambassadors of 7 countries attended the event .

Accra Weizo is an annual Tourism event for the ECOWAS region which is held in Accra Ghana by the Organisers of Akwaaba African Travel Market.

The Top 100 Travel and Tourism Personalities in West Africa were also honoured at the event, including leading travel promoters in Nigeria and Ghana equally emerged winners of the award, among whom are Mrs. Uloma Egbuna, the Managing Director/Chief Executive Officer of Tour Brokers International; Mr. Simon Grindrod, the General Manager of The Wheatbaker Lagos; Dr. Michael Pinder, Group General Manager, Sun Heaven Hotels and Resorts, and Mr. Lehlohonolo Hloni Pitso, the Regional Manager West Africa for South African Tourism’s regional Africa office based in Lagos, Nigeria: all from Nigeria.

“The Top 100 Tourism Personalities was set up to recognize individuals who have distinguished themselves and through their efforts or that of their organizations have impacted positively on the travel and tourism sector across the West African sub region, whose efforts have stimulated and helped to achieve their individual country’s tourism goals and forging interactions among stakeholders and customers across the region”, says Mr. Ikechi Uko, organizer of the awards.

Among the winners is Mr. Frank Nneji the CEO of ABC Transport.

He  won the award in recognition of his trail blazing effort which has transformed land transportation across West Africa and in the process linking several countries conveniently through the gesture.

ABC Transport, the most successful transport company in West Africa, has been at the fore front of conveying people and goods across West Africa for over a decade and in the process has transformed tourism in the region since it launched its fully air-conditioned coaches on the West African routes in 2004.

In a report published by ATQNews.com, road transport companies have over the years impacted positively on the Ghanaian economy with increase in tourists flow.generating 60-70% travellers to Ghana, delivering about 1000 passengers a day from Nigeria.