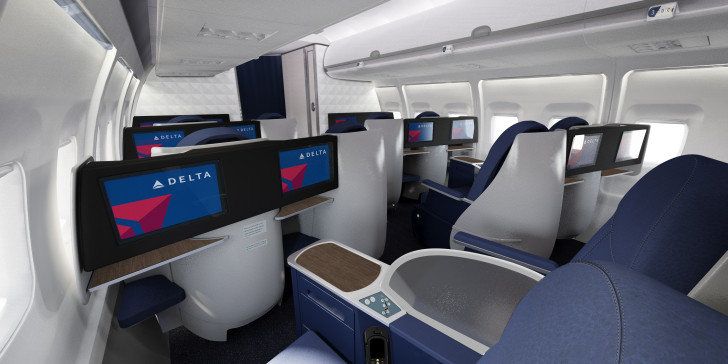 For maximum comfort for travellers between Los Angeles and Sydney and Los Angeles and Shanghai, Delta Airline has said that beginning from December 15, 2015, it will provide in-flight loungewear, helping the airline’s premium customers settle in on two of the longest flights from LAX.

The sleep and lounge suits are the latest in a number of enhancements Delta has made in the Delta One cabin including full flat-bed seats with direct aisle access, Westin Heavenly In-Flight Bedding, noise-reducing headsets and Tumi amenity kits complete with eye shades, ear plugs and striped on-board socks, among other items.

Delta One customers are also now treated to a culinary experience inspired by the flavors of the season and a wine program developed with wines from acclaimed global vintners.

“We know how important sleep is to our customers, especially on ultra-longhaul flights where they’re traveling thousands of miles halfway around the globe, with a full flat-bed seat, a Westin Heavenly duvet and now new Delta One loungewear, settling in on a long flight has never felt more like home”, Allison Ausband, Delta’s Senior Vice President – In-Flight Services, said.

And beginning in March 2016, Delta will add the light gray cotton loungewear to all its flights between the U.S. and China (Beijing, Hong Kong and Shanghai).

Customers will be able to choose between a small/medium and large/extra-large unisex suit.

The loungewear is the latest in a suite of thoughtful enhancements to the Delta One experience, and its introduction follows months of product and fabric testing to bring a superior level of indulgence in-flight. Customers are encouraged to take the outfits with them and use them in their home, at the hotel or on future Delta flights.

Bringing an exceptional and comfortable on-board experience extends to Delta’s joint-venture partner Virgin Australia as well, which also offers complimentary sleepwear in Business Class on longhaul flights. The two airlines are committed to making thoughtful investments for customers flying to the South Pacific on a collective route network that includes the region’s top business and leisure destinations.

Between the two carriers, customers have access to three daily flights to Sydney and Brisbane with connection opportunities to 40 destinations in Australia and New Zealand. Through Delta’s hub in Los Angeles, customers arriving on the joint venture’s South Pacific flights can connect to 53 North America destinations.

Delta customers departing from Los Angeles International Airport have in the last several months benefitted from a $229-million top-down renovation of Terminal 5 at LAX, which includes a brand new check-in lobby, a renovated Delta Sky Club, additional security checkpoints, and premium food and restaurant offerings featuring local favorites. For customers traveling in the Delta One cabin, an exclusive check-in, Delta ONE at LAX, offers expedited security and personalized customer services.

Delta’s seat growth in Los Angeles has grown 99 percent since 2009.

The airline has also significantly expanded its Los Angeles network over the past year with service to new destinations, including Shanghai, China – which launched in July –  and an increased number of flights to destinations it already serves, including New York-JFK, to which Delta will serve 10 times daily from LAX next year.

Delta was named Fortune magazine’s top 50 World’s Most Admired Companies in addition to being named the most admired airline for the fourth time in five years.

Additionally, Delta has ranked No.1 in the Business Travel News Annual Airline survey for four consecutive years, a first for any airline. With an industry-leading global network, Delta and the Delta Connection carriers offer service to 327 destinations in 57 countries on six continents. Headquartered in Atlanta, Delta employs nearly 80,000 employees worldwide and operates a mainline fleet of more than 800 aircraft.

The airline is a founding member of the SkyTeam global alliance and participates in the industry’s leading trans-Atlantic joint venture with Air France-KLM and Alitalia as well as a joint venture with Virgin Atlantic. Including its worldwide alliance partners, Delta offers customers more than 15,000 daily flights, with key hubs and markets including Amsterdam, Atlanta, Boston, Detroit,Los Angeles, Minneapolis/St. Paul, New York-JFK and LaGuardia, Paris-Charles de Gaulle, Salt Lake City, Seattle and Tokyo-Narita.