Travellers give British Airways’ B747 warm reception at Lagos airport 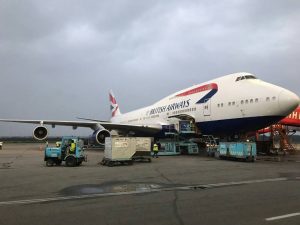 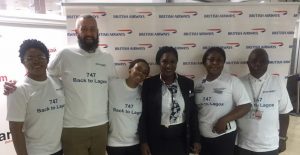 British Airways Boeing 747 has commenced flight to and from the Murtala Mohammed International Airport in Lagos Nigeria.

The much anticipated flight of the ‘Super High J’ aircraft arrived in Lagos on 7 September, 2017 and received a warm reception by the public and esteemed British Airways staff and customers who shared the excitement.

British Airways BA075 departed Terminal 5 at Heathrow, London by 11:30am and arrived at Lagos at 17:55pm on 7 September.

The Boeing 747 to the delight of British Airways local management, was full in all classes both from London and on the return journey back to London.

In addition to the smooth flight, passengers were introduced to equipped Panasonic’s next-generation eX3 entertainment system, which gives a choice of over 1,300 hours of entertainment, including more than 130 movies and 400 TV programs on larger, high-resolution screens, with touch and swipe functionality, giving the system the familiar feel of using a tablet.

Speaking on the development, Kola Olayinka, British Airways regional commercial manager for West Africa, said: “British Airways is excited to have the Boeing 747 back on the Lagos –London route and we are extremely delighted our esteemed customers have given a warm reception to the new Boeing 747 service.”

The Boeing 747 affords a universal power socket that is installed at every seat, capable of accepting plugs from the UK, US and Europe and World Traveller customers will have their own USB sockets to power phones and tablets.

“For our esteemed customers traveling the Lagos – London route, the refreshed Boeing 747 will surely give the right flying experience and British Airways is always committed to delivering unrivaled flying experience”, Olayinka said.

Four hundred million pounds will be spent on Club World with an emphasis on improved catering and sleep. At Heathrow a First Wing check-in area with direct security and lounge access has launched, and lounges around the airline’s network are to be revamped and improved. All customers can look forward to the latest generation Wi-Fi across British Airways’ long-haul and short-haul fleets over the next two years.