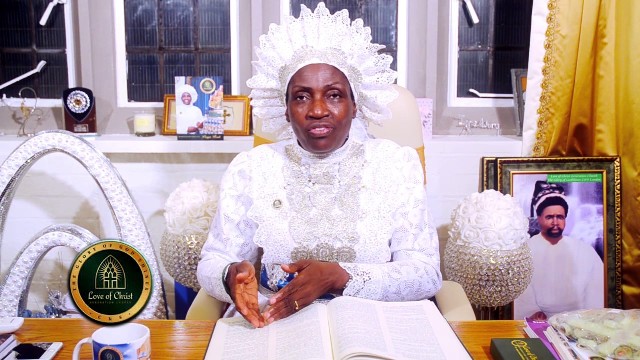 Ajayi, who is founder, Lovers of Christ Generation Church, London, said agriculture holds the key to engaging young graduates, who she said should go into production of food as God has promised to restore the years eaten by cankerworm.

Speaking in an interview at the arrival hall of the international wing of the Murtala Muhammed Airport (MMA),Lagos, Ajayi said she was happy to be in Nigeria with a message from God for the youths to embrace agriculture.

“Let us go producing, our foundation, Esther Ajayi will go into producing, we are going into great farmlands and go into the real business of producing, then we are going to be thinking about how to store the produce from the farms. That is paramount in our plans for Nigeria,” She said.

The London based clergy, who attracted a huge reception at the airport, urged Nigerian political leaders to eschew greed and demonstrate the fear of God.

She said that only leaders, who do not have reverence for God will allow greed, becloud their sense of judgment.

Ajayi also stated that it was wrong for any clergy person to hide under any cloak to extort money from people under the guise of prayer.

She  added that God has freely given his spirit to bless his people and must not be used to exploit the congregation.

Speaking on the going controversies about tithing, she said that Christians, who are led by the spirit of God should sow seed to enable them receive Biblical blessings.

“But, if you are a pastor and then you are greedy, do not hoard, as you receive you give, it is a Biblical mandate.  In my church, as a practical pastor we give Bibles freely, we need to help poor people, who are in need. Some people are already in trouble concerning that because they ought to receive and use it to bless other people.”

She faulted claims in some quarters suggesting material exploitation, saying that the church has been involved in charity engagements by distributing Bibles and other materials including feeding of the flock during church services on Sundays in London as assistance to members.

She advised Christians to build their faith in God, whom she said is not a magician but answers the fervent prayers of His people, who diligently seek His face in times of need.

According to her, “My advice to Nigerians is that God has told us to go and produce. We should go producing, whether we are farmers, the Lord has promised us to go into production, because God is going to restore the years that the cankerworm and locust has eaten. Do not be a barbaric Christian; Jesus Christ is not a magician or miracle worker. Do your path and God will crown your efforts.

On her message for Nigerian political leaders, Ajayi said, “Let the politicians have the fear of the Lord at the back of their mind. Let me tell you, greed will not take you anywhere. Greed will only make you to store and store when other people are suffering.”

On allegation that some clergies are extorting their congregation, stated that her church had been pioneering giving to its flock, by giving Bibles and books

“Giving to the church is not by force, if you feel like giving give. This is motivated by my belief as a practical pastor. Do not force yourself to give, give when it is comfortable for you, if you give God is happy with a giver, who is not doing it grudgingly. Do it when you feel like doing it joyfully.

“There was never a time my church was involved in extorting money from the congregation, because one Christian is doing it does not make all Christians bad. That is my philosophy concerning life. God knows us, He knows why people are doing what they are doing. I am talking for myself, freely we have received, and freely we shall give.”

On her New Year message, Ajayi said, “The message from God is that we should go producing, the Lord will restore us and the way forward is to produce something. Do something new and God will bring the change,”