US supports NDLEA operations with $11m 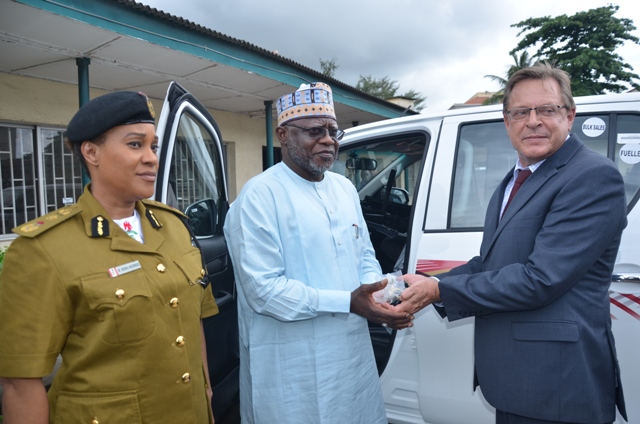 The United States (US) Government has provided training to 1,580 officers and supplied equipment worth over $10 million to the National Drug Law Enforcement Agency (NDLEA).

The United States Consul General, Mr. John Bray made the disclosure while presenting eleven operational vehicles to the Chairman/Chief Executive of the Agency, Col. Muhammad Mustapha Abdallah in Lagos.

“Since 2013, the U.S. Consulate in partnership with the U.S. Africa Command and the Bureau International Narcotics and Law Enforcement Affairs has sponsored over 100 training courses for the NDLEA providing training to 1,580 officers. The agency has received training in Intelligence, Evidence Collection, Management Skills, Tactical Skills and Instructor Training. In addition to the training, the U.S. has provided computers, luggage scanners, digital drug analyzers, tactical equipment, radios and vehicles to the agency” Bray stated.

The US envoy promised to increase support to the NDLEA in drug control .

” Today we are donating eleven vehicles to assist the agency in their counter narcotic efforts. We will continue to support the agency and the country of Nigeria to combat the proliferation of drug trafficking and drug abuse”.

NDLEA Chairman said that the cordial working relationship between Nigeria and the United States Government has led to tremendous progress in the fight against Drug Trafficking Organisations (DTO); stressing that the need for deeper collaboration among countries remains significant to the overall success of drug control.

According to Abdallah, “Mr. President is pleased with the impressive scorecard of the Agency resulting from collaboration with the United States and other partners. The recent discovery of a super methamphetamine laboratory in Asaba, Delta State and the arrest of suspected drug kingpins including four Mexicans and Five Nigerians is very encouraging”.

The NDLEA boss,  while noting that illicit drugs have very devastating consequences on peace, security and development of the nation promised to relentlessly trace and cut off channels of drug distribution.

“The Agency shall spread its dragnets in cutting the supply of drugs, tracing and confiscating illicit drug proceeds. We are pleased with the assistance the Agency has received from the US Government” Abdallah stated.

Since 2011, NDLEA has discovered 11 clandestine methamphetamine laboratories in Nigeria.

The danger caused by the production of methamphetamine in terms of increased trafficking, addiction, toxic waste and related crimes cannot be understated.