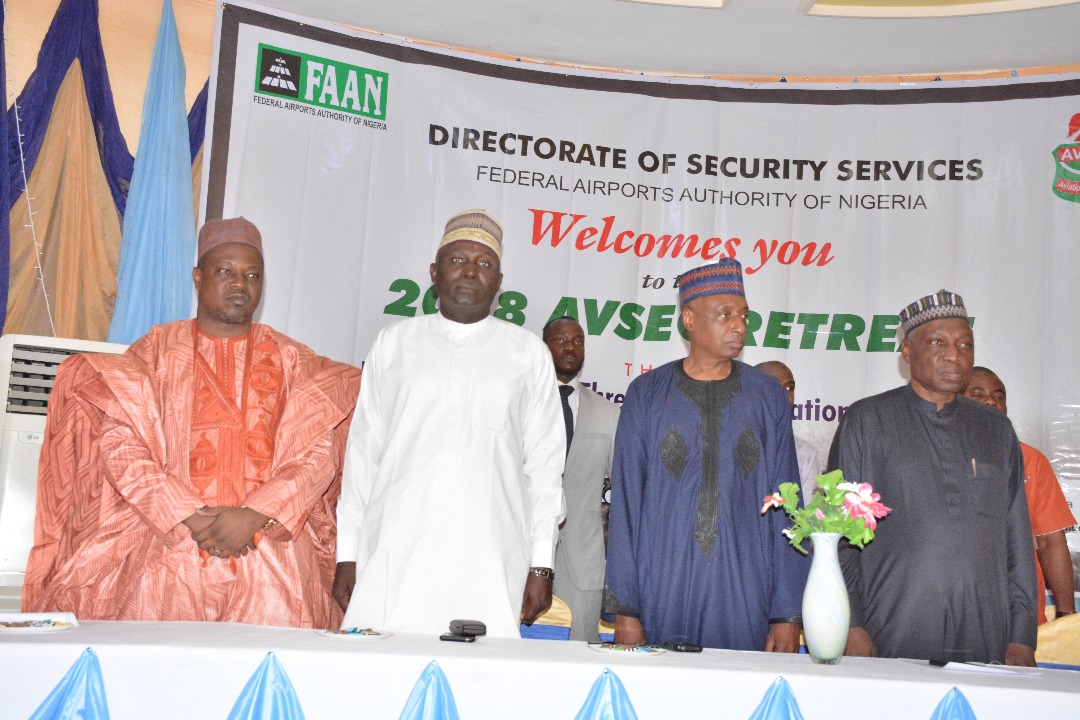 The Minister of State, Aviation Sen. Hadi Sirika has said that the Federal government approved arm bearing for Aviation security personnel of the Federal Airports Authority of Nigeria (FAAN), in order to complement other security agencies’ efforts at combating threat to security at airports.

Sirika, who made this known in Katsina at the 2018 AVSEC retreat said discussion was at its final stage for approval saying it will further strengthen the integrity of the airports in view of the growing threats to the aviation industry.

According to the minister who was represented by the Rector Nigerian College of Aviation Technology NCAT Zaria Capt Mohammed Abdulsalami, arming AVSEC will ensure proper policing of the sector by the personnel, adding that it was part of efforts by the President Buhari administration to give the country dividends of democracy.

He said rebranding of AVSEC was important in the building brand identity and creating a recognisable corporate identity for officers with the aim of making them much more professional and customer friendly to meet up with the initiative of the Ease of Doing Business.

Sirika said most countries have shown keen interest in the country’s growing and expanding aviation industry stressing that aviation security was seen as a pivotal tool to sustaining safety in all the airports which remained a model to the integrity of the nation.

The Minister noted that the United Nations decision to establish two aviation security training colleges in the country was another notable achievement of the present administration.

According to him, this was aimed at assisting not only in the  war against terrorism but to provide a special class of professionally trained AVSEC unit through the training of 30 selected aviation security master trainers who will in turn train others.

He disclosed that the importance of the certification of FAAN training centre by the Nigerian Civil Aviation Authority (NCAA) cannot be over emphasized as it will further strengthen and boost the capacity and technical know-how of aviation security personnel in the country.

In his good will message, the Managing Director of FAAN Engr. Saleh Dunoma said FAAN was investing in aviation to create enabling environment that will encourage efficiency in tackling emerging security threats to civil aviation.

Dunoma explained that FAAN recently procured 10 additional patrol vehicles to boost the current fleet of vehicles for effective coverage and patrol while additional screening machines were being procured and old ones being replaced.

The MD explained that the agency successfully recruited and trained over 230 AVSEC officers adding that the management and the Minister was poised to equip the AVSEC directorate to enable them discharge their responsibility effectively and efficiently.

Dunoma called for total commitment, determination and cooperation by all to achieve their desired objectives both for FAAN, aviation industry and the entire nation.

He urged them to put their best and respond to all emerging threats in timely manner while constantly reviewing and upgrading their  system holistically.

He expressed optimism that the retreat will renew determination, commitment and zeal to achieve the onerous task of enhancing the security of the travelling public while protecting the facilities that government has invested huge funds to provide for comfort.

Also speaking, director, Security Services FAAN, Capt USA Sadiq noted that the industry was at a critical juncture in global aviation where terrorism was assuming a new dimension adding that aviation security remained the pivotal in the actualization of a safe and secured aviation industry in the war against terrorism.

He stressed the need to close the gap created by the anomaly to adequately deploy all physical and material resources to augment in areas of lapses.

He noted that securing the airport with CCTV and detecting equipment will enhance the function of AVSEC.