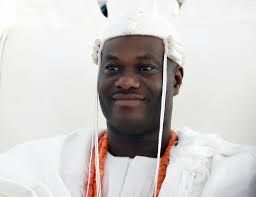 Ooni of Ife, Oba Adeyeye Enitan Ogunwusi Ojaja II, has explained that he prefers to patronise/use Nigerian companies/materials and luxury rather than foreign made, hence the reason for his choice of Arik Air for him and his entourage in their trip to the United States.

The First Class Monarch, who travelled from Lagos to New York aboard Arik Air’s A330-200 aircraft that departed the Murtala Muhammed International Airport, Lagos for JF Kennedy Airport, New York at midnight last Wednesday said, “I am an apostle of made-in-Nigeria and that is why everything you see on me except my wrist watch are 100% made in Nigeria”.

Speaking with a team from Arik Air led by the Chief Pilot, Captain Adetokunbo Adekunbi, who were on hand to usher him to the departure lounge of Murtala Muhammed International Airport, Ooni Ogunwusi in company with his wife, Olori Wuraola Ogunwusi, said his decision to fly Arik Air to New York was a deliberate one aimed at reinforcing the need to patronise our own.

He commended the management of Arik Air for flying the flag of Nigeria high and pledged to use his position to get Nigerians to patronize the airline.

Reiterating his foremost position in Yoruba land, Ooni Ogunwusi stated that his flying Arik Air with other traditional rulers will bring good fortune to the airline.

The Ooni’s entourage numbering over 50 had not less than 10 other Yoruba traditional rulers from Oyo, Osun and Ekiti States.

To this end, Arik Air, West and Central Africa’s largest carrier,  is excited to have received  the  royal endorsement from the Ooni of Ife, Oba Adeyeye Enitan Ogunwusi Ojaja II as the foremost traditional ruler and a large entourage including some traditional rulers from the South West States of the country reaffirmed his support for Nigerian brands by flying Arik Air from Lagos to New York on a tour of America.

The airline operates a combined number of about 120 daily flights from its hubs in Lagos and Abuja, and has been Africa’s fastest growing airline for the last five years.