Why we are reducing workers’ pay—Choms, Caverton helicopters MD 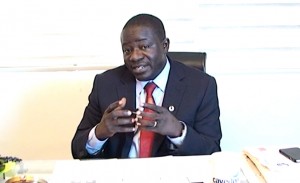 Josiah Choms, managing director of Caverton helicopters has attributed the reason for reducing the salaries of some staff of the company to the drop in oil price and cash crunch being experienced globally.

He said the situation has led to their clients , requesting for discount while some have reduced the number of aircraft they use drastically.

Choms, who added that it is not a specific Caverton situation, explained that the company had also discussed with the unions at length.

“Drop in oil price affected everybody. They agreed some people will take pay reduction. One of our clients had 7 aircraft, now they are flying 3. We held a meeting, we explained to them. They made some demands which we acceded to. We’ve had several sessions with them.

“We’ve done the best we can, in this economic downturn. When we are doing the best we can to keep them. There was a time of plenty for 5 years”, he said.

Choms, who explained that their salaries are up to date, said: ‘There was time of plenty when oil was over 100 dollars per barrel, now it is 40. The company tries as much as possible to explain the situation on ground to the union.

He said, “I do not understand the union’s position and the threat that this represents. We’ve engaged the union in light of the global economic meltdown which is not a specific Caverton situation. Everybody in the world and in Nigeria is facing serious challenges, how our clients have requested for discount, some of them have dropped aircraft. We are not an airline that flies based on passenger traffic. We work on contract.

“With a dwindling revenue strain, there was no other way but to look at how to increase efficiency and cut our cost. If the right thing to do is to shut down the company when we are doing our best to retain everybody, I wish them good luck. We would now see who will suffer”, he added.

The National Union of Air Transport Employees has however issued a 7-day ultimatum to the company to reinstate the pay or face an industrial action.