Why we sacked 22 Nigerian workers-Kenya Airways 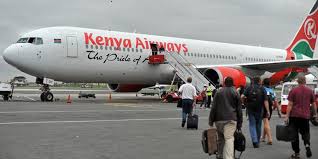 East African carrier; Kenya Airways on Monday, explained reasons it sacked 22 out of 26 Nigerians in its employ, saying the job (sales and commercial roles) of the affected workers, has been contracted to a General Sales Agent (GSA) .

The workers, representing about 86.4 per cent, it was learnt, were sacked on Friday.

It was learnt that only four of its Nigerian staff were retained by the management of the airline after the purging exercise.

Those retained are Country Manager, Mr. Afeez Balogun, the Station Manager, and two other staff.

A source said the carrier’s management took the decision without taking into consideration the Nigeria labour laws, which kicks against unilateral decision by employers when disengaging workers.

But Kenya Airways management in a swift reaction explained that the union declined to attend three meetings where the issue  of redundancy and wages would have been discussed, adding that it had also initially informed the union of the redundancy plan in a first meeting held on February 1, 2018 and in another letter on January 15, 2018.

In a document made available to journalists, the airline in a letter dated April 11, 2018 and signed by Bridgette Mbua, to the National Union of Air Transport Employees (NUATE), expressed its ‘disappointments at the turn of events via a letter dated March 2, 2018, adding that that despite holding another meeting on March 16, the union refused to talk about redundancy subject and insisted on another date to discuss it.

It added that the union failed to attend the meeting on April 5, where they were supposed to finalise discussions.

It added that it proceeded on the redundancy plan having ‘complied with the requisite provision of the law…and implemented it in the following terms: payment of one month salary in lieu; payment of a severance/redundancy allowance at the rate of 23 days basic salary at the end of every completed year of service; payment of unutilized leave days accrued as at the date of redundancy and repatriation allowance equivalent to one month salary for the staff who were hired in Abuja and later transferred to Lagos, among others.

The General Secretary of the National Union of Air Transport Employees (NUATE), Comrade Olayinka Abioye said that the unilateral sack of the workers by the airline would not be allowed to stand by the industry unions.

Abioye insisted that the sack of the workers was illegal especially at a time the management had reached an agreement to implement some of the reviewed conditions of service for the workers.

He said: “We have been agitating for the review of terms and conditions of employment in Kenya Airways for about two years. We started the process and somewhere along the line, the management of Kenya Airways said they were doing restructuring exercise because of the financial conditions of the airline. In the meantime, we have even agreed to certain reviews approved by both parties and only waiting for implementation.

“That was one of the reasons we embarked on the picketing we did last December. Then, after the picketing, we were invited and we concluded the review after the review, we discovered that our Nigerian staff were being owed about 26 months monetary benefits. They claimed that they won’t be able to pay all, but after the consultations, we agreed for 16 months to be paid the workers.

“In between, they introduced a new shift into the discussion, saying that going forward they want to replace all business plans with new business plans called General Sales Agent (GSA), which means they want to engage a travelling agency to handle the ticket sales and reservation and all the workers would be sacked.

“We as unions, didn’t like that and we expressed our dissatisfaction and they said it was not just only Nigeria that would be affected, but throughout the continent. Then, we just said we have formed a consortium of GSA so that the workers would still be retained, but they informed us that we were too late and as they have engaged another GSA already.”

He explained further that the unions had informed the Director-General of the Nigerian Civil Aviation Authority (NCAA), Capt. Muhtar Usman of its intent to picket the operations of the airline any moment from now.

He emphasised that the attention of the Minister of State for Aviation, Sen. Hadi Sirika would also be drawn to the action of the airline and the decision to be taken by the unions.

He however, said that the unions would jointly hold a congress on the issue in Lagos, saying the outcome of the congress would determine the next line of action.